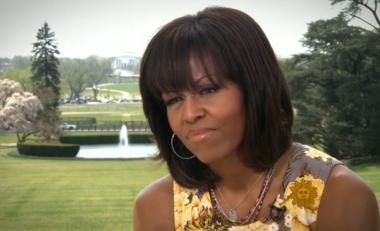 Plan B is not just a controversial morning-after pill; it’s also an effort on Michelle Obama’s part to paint anyone who doesn’t agree with her husband’s restrictive gun measures as people who are willing to force children to live their lives in terror. Michelle attempted to paint that picture during an interview with Lee Cowan on “CBS Sunday Morning,” when she dredged up sob stories from her gun violence visit to Chicago last month.

The first lady said that after delivering her speech on gun violence in April, she was amazed at the extent to which Chicago’s children were forced to live in subjugation to the fear of being shot. Thus, the unspoken premise of Michelle Obama’s comments is that the cure for children in Chicago being dominated by the fear of being killed by a stray bullet is to subjugate the entire nation’s Second Amendment rights.

Michelle shared that students at Harper High School in Englewood, Illinois told her, “Every day they wake up and wonder whether they’re going to make it out of school alive.” Mrs. Obama said, “I mean, every single kid worries about their own death, or the death of someone, every single day.” Michelle Obama uttering those words is a prime example of liberal duplicity. This is a woman who supports 3,500 babies a day being aborted, and she’s preaching to us about teenagers who, no thanks to her or her husband, miraculously made it out of the womb alive — not making it out of school alive?

To add insult to injury, Mrs. Obama then said “we” have an “obligation to these kids” to try again. When Mrs. Obama uses words like “obligation to these…” anything, it’s a clear sign that hubby, on behalf of some victimized group, believes he is bound to a higher authority than Congress and is probably out searching desperately for some way to circumvent the law.

Bordering on tears, the first lady went on to say: “And we, as a nation, have to embrace these kids and let them know that we hear them, and see them.” Disregard that “we as a nation” part, because rest assured, Mrs. Obama believes that no one except her and her husband hear and see the fearful children of Chicago. And only those who adhere to the liberal vision have the power and authority to quell anxiety by finding a way to restrict the ability of the nation’s gun owners to exercise their right to “keep and bear arms.”

Ratcheting up the sympathy factor yet another notch, Michelle then shared with a sycophantic Lee Cowan that “One kid told me he felt like he lived in a cage, because he feels like his community is unseen, unheard and nobody cares about it.” What that caged kid probably hasn’t realized just yet is that the first lady of the United States comes to Chicago regularly to use the “unseen, unheard” and uncared-for children of the Windy City as stage props to help push a progressive gun agenda.

Speaking of guns, Barry visited Mexico where, thanks to him and Eric Holder, it’s even worse than Chicago when it comes to gun violence. Careful not to mention beheadings and machetes in his speech, Obama did suggest to a rapt audience of Mexican students that gun control would save lives on both sides of the border. Ohhh… so that explains why the president decided not to control gunrunners taking illegal high-capacity rifles from one side of the border to the other.

In a rare moment of honesty, Obama did acknowledge his own involvement in supplying Mexico with guns when he said, “Most of the guns used to commit violence here in Mexico come from the United States.” No Shiite, Sherlock.

Then the president gave the crowd an impromptu refresher course on the U.S. Constitution, saying, “I think many of you know that in America, our Constitution guarantees our individual right to bear arms. And as president, I swore an oath to uphold that right, and I always will.” While pushing amnesty in Mexico, what he didn’t do was explain how United States immigration law works. Trawling for future voters, the president chose to conveniently skip that particular lesson.

Instead, immediately following the mini-course on the Second Amendment came the ‘but’ portion of the president’s speech, which is also known as the unofficial ‘Obama clarification.’ That’s where an unspoken ‘but’ cues the president to insert an addendum that corrects what he perceives to be one of the fundamental flaws in the Constitution.

Obama then said “At the same time (which is really a ‘but’), as I’ve said in the United States, I will continue to do everything in my power to pass common-sense reforms,” (which are really ‘Barack Obama-approved modifications’) “that keep guns out of the hands of criminals and dangerous people,” (that would be law-abiding Americans) “that can save lives here in Mexico and back home in the United States. It’s the right thing to do.”

Sorry, Mr. President, it’s a little too late to ‘do the right thing.’ Why wasn’t that option proposed prior to illegally arming drug cartels with AK-47s? Who knows, maybe some of those guns have even made their way up to Illinois where your wife is now claiming we need to make an effort to “embrace… hear and see” Chicago’s terrified children who live each day in fear of being shot.