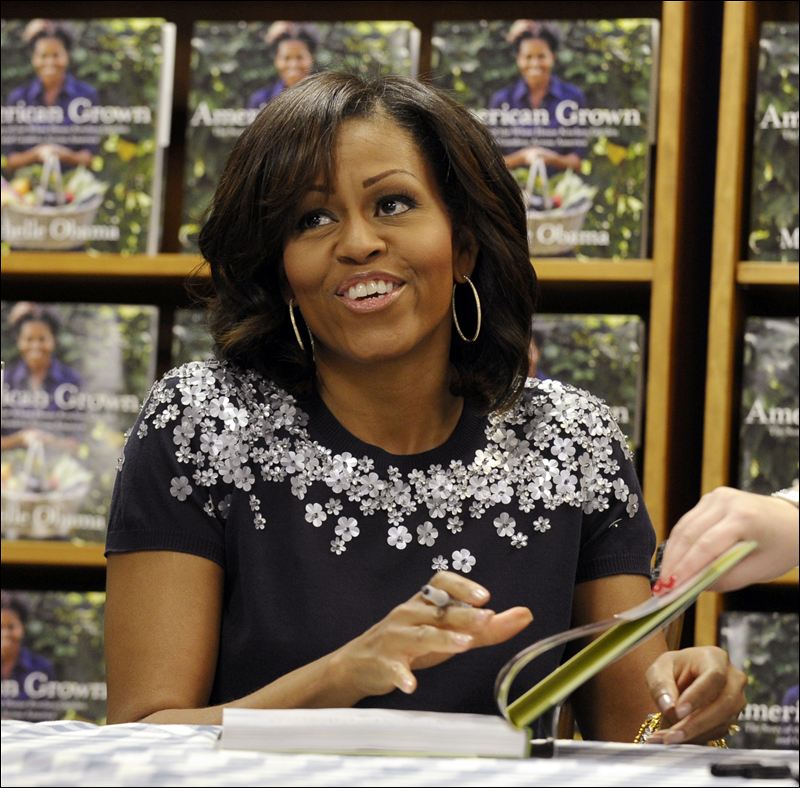 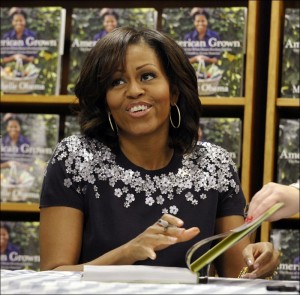 Many would argue that Michelle Obama’s anti-obesity/’Let’s Get Physical’/veggie-infused initiative is a positive direction for America to go. In essence it is. However, when Barack or Michelle start talking about anything that has the word “community” in it, America had best proceed with caution.

Community talk is what happened when Michelle Obama showed up at Politics & Prose, a Washington DC independent bookstore that Mrs. Obama called “a real staple of [the] community.” Michelle was there for an American Grown: book signing.

About 250 sicko-phants stood in the rain waiting to hear Mama Obama blather about the importance of gardening, a hobby she picked up about four years ago when she bulldozed 1,500 square feet of the South Lawn. Since then, she talks like she whips up fresh pesto with bouquets of fresh basil she cultivates in the “Kitchen Garden.”

The ripped-up patch of lawn out back is also home to a bee hive tended by a carpenter who has worked at the White House for more than 20 years. So contrary to what the first lady would have you believe, she doesn’t work out her quads dodging honey bees, hoein’ the garden in $500 Tory Burch gardening boots, or harvesting 55 kinds of fruits and vegetables — which yields1,000 pounds of food — because there’s a staff that does the grunge work.

At P & P Michelle said that the general reason for writing American Grown was to use it as a springboard to broach the subject of epidemic childhood obesity. The first lady’s other goal was to get Americans, who are probably too busy working to stay afloat financially in an economy her husband has decimated, to “[m]aybe start thinking about how to start a garden on their own.”

In her book American Grown, Michelle describes her fretful first encounter with gardening:

By 20 March, 2009, I was like any other hopeful gardener with a pot out on the windowsill or a small plot by the back door. I was nervously watching the sky. Would it freeze? Would it snow? Would it rain? …I was embarking on something I had never attempted before: starting a garden.

Not for nothing, but what is it about liberals, whether it’s the first lady or the Hollywood types, that makes them think that whatever they’re into is something everyone else should be into it too?

Michelle Obama is a prime example of a woman afflicted with a form of ‘Gwyneth Paltrow Syndrome.’ GPS is a disorder where liberals impose whatever their newest interest is on everyone else, ad nauseam, and use their public exposure to hold millions captive to their masturbatory exercises in self-exaltation. Think Gwyneth Paltrow lying across Cee Lo Green’s piano singing “Forget You” at the 2010 Grammy Awards.

So far, Michelle Obama hasn’t prostrated herself across anyone’s piano, but based on what she subjects America to with some of her sweat-inducing initiatives, she might as well.

Meanwhile, back at the rainy-day book signing, after they got a security clearance Mrs. Obama was joined at the mostly Politics & not so much Prose event by Patricia, John and Abigail Dwiggins of Winston-Salem, North Carolina. The community-gardening Dwiggins family farms the Betty and Jim Holmes Food Bank Garden featured in Michelle’s book.

For an article entitled “A Community Garden Grows in Walkertown,” Kim Dobesh, who works in the co-op garden at the Walkertown Branch Library in Forsyth County, North Carolina was asked by Don Dwiggins, “Why was [the garden] started?” Dobesh replied, “We were looking for more affordable, local, and healthier options for feeding ourselves and our families. We wanted to forge stronger relations within our community, breaking racial, economical, and generational boundaries.”

Couple Dobesh’s ‘affordable, local, and healthier’ lingo with the belief that planting broccoli rabé has the power to break “racial, economical, and generational boundaries,” and that inspiring formula could motivate Mrs. Obama to implement nationwide mandatory collective cultivating.

Michelle pointed out that “Community gardens are a significant part of the history of this country, which is why [she] thought it was important to incorporate these stories in the telling of the White House garden story.” Sorry, but the first lady giving shout-outs to school and community gardeners should make every American who would rather not participate in agricultural activities gag on their locally-grown Brussels sprouts.

Moreover, during the book signing Michelle Obama repeated the word ‘community’ so many times it was literally impossible to keep count. For instance, Mrs. Obama claimed that her book is not just the story of the White House Kitchen Garden:

Phew! That was a lot of community talk.

Nonetheless, concerns arise when the first lady of the United States attempts to stimulate interest in community gardening by quoting fifth grade students who (probably did not) say things like “I also like the garden because of how you can work together with other people on something fun,” and “sharing good food made us want to share good feelings.”

Sharing good feelings is nice, but with those sorts of talking points being bandied about, before long instead of attending book signings, gardening-resistant Americans will be herded into community garden groups. Once there, led by Mrs. Community Organizer and supervised by collective gardening experts, America can expect to be “fundamentally transformed” into a culturally diverse kibbutz.