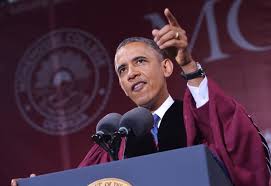 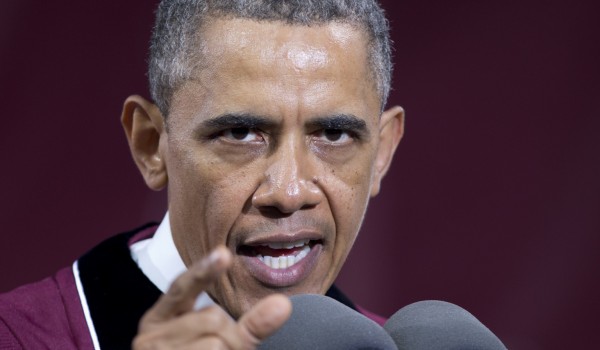 Without the assistance of a Marine to shield him from the rain, Obama put on his best “in the house” accent and greeted distinguished guests and 2013 graduates.  Then, after talking about hair and Michelle’s feelings about rain, the president bestowed dispensational entitlement “Crown Forum credits” upon students who would otherwise be ineligible to graduate without them.

Barack “You can’t tell me much” Obama, newly installed as an honorary member of the elite African-American Morehouse Men intellectuals, told the group, “You can always tell a Morehouse Man — but you can’t tell him much.”

With that in mind, one can’t help but wonder whether the scandal-ridden Obama heard his own words when he quoted late Morehouse president Benjamin Mays, who once said, “It will not be sufficient for … any college, for that matter, to produce clever graduates … but rather honest men, men who can be trusted in public and private lif[e].”

As he spoke of Martin Luther King, Jr., Barack Obama proved again that he harbors deep-seated bitterness by focusing on skin color instead of the content of character.  Worse than that, the president had the audacity to tie Dr. King to community organizer/Rules for Radicals author Saul Alinsky when he talked about how at Morehouse MLK was introduced to “the writings of Gandhi and Thoreau, and the theory of civil disobedience.”

Then, just as he did in Israel, and as both he and his wife Michelle do every chance they get, Obama paraphrased the following Alinsky quote: “It is necessary to begin where the world is if we are going to change it to what we think it should be.”  Regarding Martin Luther King, Jr., the president proclaimed, “It was here that professors encouraged him to look past the world as it was and fight for the world as it should be.”

Moving right along, Obama chose to transport the graduates back to a time when “Jim Crow culture told [them] every day that somehow you were inferior,” and that despite their ability to pay $40K a year in tuition, “the bitter legacy of slavery and segregation” has not “vanished entirely.”

Barack Obama reminded the grads that, even though “someone who looks just like [him] can somehow come to serve as president of these United States of America,” or become a zillionaire like Jay-Z, Tiger Woods, and Sean “Diddy” Combs, “racism and discrimination [still] exist.”

According to the president, Morehouse Men “[w]ield something even more powerful than [a] diploma … and that’s the power of … example.”  Wait!  The president should probably disregard the four Morehouse Men arrested earlier this month for raping a Spelman student.

Broaching job creation and blacks having to “work twice as hard,” hardly working Obama covered crime- and gun-violence reduction, the security of health care, and educating children.  What he didn’t mention was his need to console a public school-educated child who couldn’t comprehend two minus one.  With plans to grant amnesty to 30 million illegals, the president saying that “subtraction is tougher than addition” suddenly makes sense.

A financially fortunate Barack Obama certainly enjoys an extravagant lifestyle and thinks nothing of spending oodles of taxpayer money.  Yet he still ridiculed “fancy jobs … nice houses[,] and the nice cars.”

Prefacing his traditional put-down of success, the president said, “[N]o one expects you to take a vow of poverty.”  Then, following that introduction, Obama clarified: “But I will say it betrays a poverty of ambition if all you think about is what goods you can buy instead of what good you can do.”

The president went on to tell the Morehouse Men: “So, yes, go get that law degree.  But if you do, ask yourself if the only option is to defend the rich and the powerful, or if you can also find some time to defend the powerless” — the latter of which being exactly what Obama chose not to do with his law degree

No Obama speech would be complete without at least one disingenuously self-deprecating aside; on this occasion, he admitted that in the past he exploited his blackness as an excuse for failure, but then confessed, “Michelle will tell you I’m not perfect.  She’s got a long list of my imperfections[.]”  The first lady corroborated that fact a few days later in Nashville, Tennessee.

Then, champion excuse-maker Barack Obama quoted the Morehouse fraternity creed — a credo that sounds strangely like the condition of America for the last five years: “Excuses are tools of the incompetent used to build bridges to nowhere and monuments of nothingness.”

The president also talked about his “heroic single mom,” absentee father, and being a husband and dad, and shared foretelling thoughts of what he plans to reflect upon on his deathbed.  Couched in his comments about family, Obama introduced identity politics by saying, “Be the best husband to your wife, or you’re [sic] your boyfriend, or your partne[r].”

Then, in a shameless attempt to marginalize and discriminate against anyone who’s not a minority, homosexual, or female, he linked blacks to illegals, LGBTs, Muslims, and underpaid women.  Before dredging up what it feels like to be a “marginalized … outsider” who suffers from the “sting of discrimination,” the president should have scanned the list of groups the IRS targeted for the last four years.

Nevertheless, winding down with a “House”-ful of Is, the president explained that his success didn’t result from “Ivy League degrees or SAT scores or GPAs,” — none of which anyone has ever gotten so much of a glimpse of.  Instead, according to Obama, his achievements hinge on his “sense of connection[,] … empathy,” and the obligation he feels to the black community as a black man proud of his Irish ancestry.

Ending his Morehouse comments, Obama said empathy made him successful because, like black men with less opportunity, without empathy, “I might have been in prison.  I might have been unemployed.”

Word to the wise, Mr. Obama: if the scandals continue to develop, those two “there but for the grace of God go I” scenarios you shared with the Morehouse Men may be more a prediction of what your future holds than a description of what your past might have been.