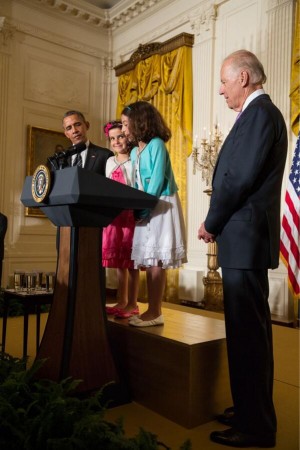 Just like annual Iftar* dinners for Muslims and $4-million vacations in Martha’s Vineyard for Michelle, each year, in an attempt “to reflect upon the progress [LGBTs have] made and recommit to the work that lies ahead,” Barack Obama makes it a priority to host a White House gala for the gay community.

This year, as the President gears up to tear down the institution of marriage, just as he’s also about the business of doing the same to the First, Second, and Fourth Amendment, the ploy is to shamelessly pretend that he’s doing it on behalf of innocent victims like Zea and Luna Weiss-Wynne.

Zea and Luna are two adorable little girls who are the daughters of Lara Weiss and Nora Wynne, two lesbian marriage equality activists, and a sperm donor friend.  Zea and Luna of Humboldt, California are the latest additions to the Barack Obama ‘Cute Children Props’ collection because the cutie pies are the ones who introduced the President at this year’s LGBT Pride celebration at the White House on June 13th.

That’s right – while the nation is embroiled in scandals that threaten every American’s liberty and while the drums of war thump away in Syria, Barack Obama took an afternoon to fête alternative lifestyles on the taxpayers’ dime flanked by Joe Biden and surrounded by a room full of gay lesbians, gay gays, gay bisexuals and really gay transgenders.

Wait! Was Chief Supreme Court Justice John Roberts also on the guest roster?  Not because he’s LGBT, but because with his historical influence over the Obamacare debate, having Roberts mingle with the crowd and dip into the hors d’oeuvres would have certainly lent an air of twisted Constitutional optimism to the same-sex marriage argument.

John Roberts or no John Roberts, the president clearly thought it would be fitting to commemorate atypical sexual preferences by having two eight-year-old girls, whose parents are both women, introduce his comments.

Which White House staffer was assigned the job of explaining to the cherubs why the tall lady in the glittery pink hot pants has a huge Adam’s apple and a man’s voice was not made public.

Way back in January when Obama signed 23 executive orders on gun control, he had four guests about Zea and Luna’s age at the ceremony, all of whom were supposedly chosen based on the heartfelt letters they wrote to him about how they wanted him to implement tighter gun controls.  It was a real tearjerker.

At the time, the president’s goal was to make weakening the Second Amendment more palatable to the American public by having children in attendance while he dramatically maintained that “[o]ur first task as a society… [is to] …keep children safe.”

Now, to undermine the traditional meaning of marriage, the president decided that Zea and Luna Weiss-Wynne, as well as seven other authors of inspiring letters about gay issues, would guilt America into agreeing with the gay lobby ‘for the sake of the children.’

The hope is that America will believe the lil’ darlins’ were uncoached when they begged in writing for Obama to assist their activist mothers in their starry-eyed quest to officially become Mrs. and Mrs. Weiss-Wynne, or vice versa

Nonetheless, subjecting children to an afternoon where sexual preference is the crux of the discussion is not even the most disturbing part of the Pride Month get-together at the White House.

Why? Because suddenly Barack ‘LGBT’ Obama has time to chit-chat around the buffet table with a gaggle of gays, that’s why.

Isn’t he the guy who hasn’t had time to comment on more pressing issues like where he was on the night Ambassador Christopher Stevens was being sodomized and murdered in Libya?  Shouldn’t the gay lobby be pressing him for an answer to that question?

Or why, after mocking and castigating President GW Bush for counterterrorism surveillance, is the president suddenly accelerating the process of ‘fundamentally transforming’ the United States of America into Oceania?

And what exactly were he and Doug Shulman discussing those other 149 times when they weren’t busy rolling Easter eggs?

Meanwhile, as America careens headlong into a vortex of adversity, it’s clear that the LGBT community’s ‘best man’ is Barack Obama.

And Best Man Barack’s top priority is to promote Zea and Luna as two little girls who just want to don hair ribbons, dress up like flower girls, and walk their two mommies down the aisle into a future of LGBT legally-wedded bliss.