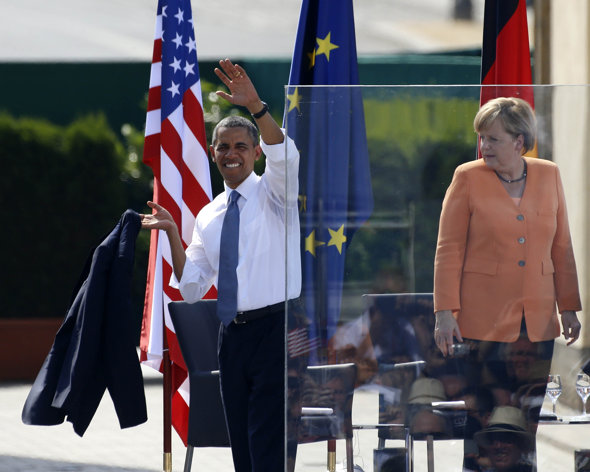 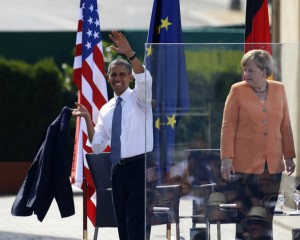 Barack Obama showed up again in Berlin. Sadly, 194,000 of the fawning devotees that cheered him like a rock star in 2008 chose to skip the 2013 encore.

Nonetheless, directly out of the Brandenburg gate, the president commenced with injecting race and gender into the conversationwhen he said “Angela and I don’t exactly look like previous German and American leaders.” Obama then informed the audience, consigned by invitation to stand in the blistering heat listening to his blather, that Michelle, Malia, and Sasha, rather than endure his grueling speech, chose instead to experience the “beauty and the history of Berlin” (at American taxpayers’ expense).

But probably the most amazing aspect of Obama’s Berlin speech was his typical lack of self-awareness when making assertions that conflict with everything he does. For instance, although President Obama is actively persecuting the “unoriginated birthright of man,” he quoted German philosopher Immanuel Kant, who said “freedom is the ‘unoriginated birthright of man, and it belongs to him by force of his humanity.'”

Obama even posed questions Americans ask about him:

Will we live free or in chains? Under governments that uphold our universal rights, or regimes that suppress them? In open societies that respect the sanctity of the individual and our free will, or in closed societies that suffocate the soul?

In Berlin, Obama attempted to one-up Ronald Reagan’s “Peace through Strength” strategy by stealing John F. Kennedy’s “Peace with Justice” mantra and scheduled the revision to take place at Brandenburg Gate, where his social justice spiel paled in comparison to authentic Reagan strength.

The president’s references were pitiful attempts to support the liberal dream of a daisy-holding, Kumbaya-singing utopia that the human condition prevents.

Ignoring nations stoking the nuclear flames, President “Ich bin ein Idiot” cited JFK’s famous 1962 “Ich bin ein Berliner” speech when suggesting that Germans “lift [their] eyes beyond the dangers of today… to the day of peace with justice[.]” Caught up in the rapture of the moment, Obama apparently missed the contradiction in mentioning Kennedy’s assassination six months after he promoted “peace with justice.”

Speaking of contradictions, Mr. Obama shared that Kennedy’s words are “timeless because they call upon us to care more about things than just our own self-comfort.” This from a president who’s about to embark on a $100 million African vacation, toting along a wife whose “self-comfort” demands recently included bunking in a $4,000-a-night Princess Grace suite in Ireland.

After encouraging youthful unemployed Germans to relinquish self-comfort, citizen of the world Obama shifted to “For we are not only citizens of America or Germany — we are also citizens of the world. And our fates and fortunes are linked like never before.” That is, unless linking “fates and fortunes” means sharing a $4,000-a-night hotel room with Michelle Obama.

Never mentioning pressure cookers, hijacked airplanes, banana hammock bombers, or wild-eyed Muslims gunning down American soldiers, and after riding around in an armored limo and building a mysterious underground bunker beneath the White House, Obama proclaimed, “We may no longer live in fear of global annihilation, but so long as nuclear weapons exist, we are not truly safe.”

President Obama also seemed to imply that food stamps and unemployment checks may be the answer to the threat of worldwide terrorism, which he claimed results from the “agony of an empty stomach or the anguish of unemployment.”

Then, after dissing Catholic education in Ireland, Obama dredged up sins that penitent nations have already remediated when he unnecessarily brought up intolerance and abuses “based on race, or religion, gender or sexual orientation.”

Obama then advanced a concept that he doesn’t apply to Christians or American conservatives, which is that “When we stand up for our gay and lesbian brothers and sisters and treat their love and their rights equally under the law, we defend our own liberty as well.”

That’s when the “Peace with justice” rant began. Obama cited free enterprise and freedom, neither of which he’s a huge fan of. From there, he segued into environmentalism, closing Guantanamo, ending the Afghan war, controlling the drones he has surveilling U.S. airspace, undermining the Constitution and calling it “balancing the pursuit of security with the protection of privacy,” and meeting moral obligations that have nothing to do with morality.

Funny, Obama proves he’s vulnerable to nuclear self-destruction whenever the Teleprompter is unavailable. Yet, he imagines peace can only be realized through sending a message to America’s enemies that in a nuclear-aggressive environment the most powerful nation in the world is voluntarily reducing the number of its nuclear warheads.

Then, after sparring with Vladimir Putin, the ex-KGB communist adulterer who’s clearly not a bastion of trustworthiness over Syria and G-8 gym space, the president claimed that Russia and the U.S. “reject the nuclear weaponization that North Korea and Iran may be seeking.”

Did he say “may be seeking?” What Obama forgot to explain was how “rejecting” nuclear weaponization saves lives if Kim Jong-Un or Hassan Rohani decides to lob a nuke.

Not to worry though; Barack quoted James Madison and then claimed that he too is moving “beyond a mindset of perpetual war.” The president cited a 2016 ‘secure nuclear materials’ summit, which despite the growing threat of international terrorism, Obama believes is a “step” toward “creat[ing] a world of peace with justice.”

The problem is that the guy who said “Threats to freedom don’t merely come from the outside. They can emerge from withi[n]” is the one threatening America’s freedom, and the perpetual warfare he speaks of is not America’s doing.

Nonetheless, in an attempt to soothe irate Germans who do not take kindly to tyrannical despots infringing on The Lives of Others, Barack Obama suggested something he does through surveillance — not face-to-face — which is to “listen to the voices who disagree” with him. Next he laughably added the importance of “always remember[ing] that government exists to serve the power of the individual, and not the other way around.”

In the end, so too does “loss of freedom in America threaten freedom everywhere.” That loss is precisely why, both in Germany and here at home, free people must grasp the potentially harmful impact the ‘peace-loving’ guy standing behind eight inches of bulletproof glass seeks to impose on the Western world.