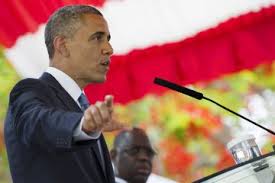 The $100-million Obama Traveling Show touched down in Senegal.  All heady from news of the activist side of the Supreme Court further weakening the U.S. Constitution, Barack Obama could not contain his exuberance over Adam and Steve getting closer to being able to book their wedding reception immediately following the more traditional nuptials of Adam and Eve.

Not happy with “fundamentally transforming” the once-great nation called the United States of America, in Senegal, where homosexuality is outlawed, Barack Obama felt compelled to talk down the established laws and leadership of the African nations hosting him.  He called for homosexuals to have equal rights in countries where gays are usually imprisoned or, worse yet, decapitated.

The stunning thing about Barack Obama’s gall is that his tolerance for anyone disagreeing with him is less than zero.  Yet he’s arrogant enough to disrespect Senegalese President Macky Sall and challenge Senegal’s stand on social issues.

What if Vladimir Putin swam over from Russia to the U.S. to appeal to evangelicals by insisting that Christians should not be forced to finance insurance policies that cover birth control and abortion?  Obama would blow a gasket.  But when it comes to his right to infringe on the leadership of others, Barack Obama has no respect for diplomatic boundaries.

President Macky Sall quickly rejected Obama’s inappropriate call for Africans to give gays equal rights under the law.  Why Sall would even host Barack Obama is curious indeed.  After all, Sall overthrew an incumbent who tried to change Senegal’s constitution and establish a familial dynasty of succession.

Sall responded to the U.S. president’s effrontery on the homosexual issue by politely saying, “We are still not ready to decriminalize homosexuality. This does not mean we are homophobic.”  Even if Senegal is homophobic, quite frankly, it’s none of Barack Obama’s business.

Senegalese law says that “an improper or unnatural act with a person of the same sex” can be punished by up to five years in prison, which is sort of the direction America is moving — but with Tea Party types being portrayed as more unnatural than gays.  Nonetheless, Sall reassured Obama that in Senegal, gays, unlike Christians and conservatives, and especially Christian conservatives in the U.S., are not mistreated.

After a meeting in the presidential palace, Obama brushed aside Sall’s comments and reiterated that his goal is to send a message to Africans that his opinion should hold more weight than African law and leadership decrees.

Then, although many had already surmised it, the world officially found out that Barack Obama is planning on transforming the universe.  Circumventing Sall’s correction, Obama stressed: “People should be treated equally, and that’s a principle that I think applies universally.” And if Macky Sall doesn’t want Chicago to visit Senegal, he’d best submit.

As for the African people, just like in America, what they want, think, or believe doesn’t matter much to Obama.  Amnesty International released a report that said that 38 African countries consider homosexuality wrong, and according to Pew, nine out of 10 respondents — 90 percent — of Senegalese, Kenyans, Ghanaians, Ugandans, and Nigerians reject homosexuality.

That means that if Barack Obama were in charge, Christians and Muslims in these African nations would be forced to submit and accept what they consider reprehensible.

Which raises the question: how can a president who claims to support Islam also support homosexuality, premarital sex, and abortion?  Is the plan, when Obama ups the ante and goes universal, to inflict his social views on Muslims, too?

Nonetheless, after calling 83-year-old lesbian Edie Windsor from Air Force One on his way to Africa to congratulate her on the SCOTUS voting down DOMA 5-4, the president said his administration would begin to closely examine every federal statute to quickly level the playing field between Billy and Lily and Billy and Willy.

That plan raises yet another question: the Obama administration has the resources to comb through every federal statute to pick out every benefit for which married same-sex couples will be eligible, but didn’t have the manpower all these years to canvas American cities and locate renegade illegal aliens?

Either way, while in Africa, Barack Obama reiterated his personal conviction that gay rights are at the “root of who we are as … American[s].”  Because after all, Obama, who now speaks for the people who disagree with him, says, “We believe in basic fairness.”  The problem is that in Obama’s world, the type of fairness he’s referring to is social and economic equity, which is unattainable without inflicting the sort of totalitarian groundwork he’s presently laying.

When he finished pushing homosexuality to Macky Sall, Obama toured Goree Island, the place where (although he won’t admit it) signares — wealthy women of color — sold their own people into slavery through the “Door of No Return” (which is a lot like what liberals do to black people in America).

As for the African people, someone should inform them that Barack Obama is a son of Hawaii — I repeat: H-A-W-A-I-I — not Africa, because for some reason the signs outside his hotel, possibly borrowed from Ireland, read, “Welcome home, President Obama.”

Along with those signs, gay (but not in a gay way) village people greeted him with music, dancing, and song, which sounds a lot like what’s going on in San Francisco.

So, on the first day of his African adventure, Barack Obama, oftentimes misidentified as a long-lost son of Kenya, is busily attending to the people’s business.  As America grapples with the inexplicable damage he’s causing here at home, he’s making his way through sub-Saharan Africa hawking homosexuality, insulting African leaders, defying Islam, and making sure the wife, kids, mother-in-law, and niece are having a great time running up the taxpayers’ tab.