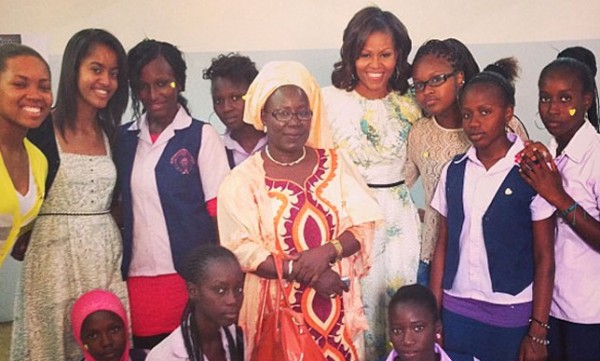 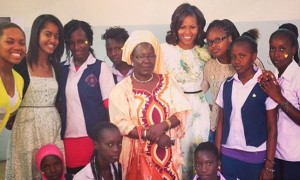 Michelle Obama is first lady of the United States of America and yet it seems that she’s searching high and low for an identity – desperate for a place to fit in.

It started after 15-year-old schoolgirl Hadiya Pendleton of Chicago was shot dead standing in Vivian Gordon Harsh Park talking with friends. Michelle Obama rushed to Chicago to attend the girl’s funeral, had her parents Cleo and Nate sitting in the Special People Sky Box with her at the State of the Union, and then told Hadiya’s story when pushing gun control at a conference on youth violence hosted by Chicago Mayor Rahm Emanuel.

It was there that Mrs. Obama said, “Hadiya’s family was just like my family. Hadiya Pendleton was me. And I was her.”

Just recently, on a trip to the Emerald Isle, while attending a special Riverdance performance at the Gaiety Theatre in Dublin, Michelle Obama again told an audience full of students, this time from Moneygall, that “It’s good to be home.”  Then she identified with schoolchildren, some of whom had been practically scolded a day earlier by the President for going to Catholic school, saying, “We are you. We are just like you.”

We already know that it’s a long way from Piccadilly to Tipperary, but come on people, it’s even further from Chicago to Dublin, and so what was Michelle Obama talking about?  Either the woman is in a perpetual identity crisis, or she is majorly confused.  We’re talking about Irish schoolchildren here.  We’ll give her a pass on Hadiya in Chicago, but Ireland?

Now she’s in sub-Saharan Africa.  Speaking in Dakar, Senegal at the Martin Luther King Middle School, again to schoolchildren, frustrated, lost without a true home and identity, Michelle Obama compared her background to that of poverty-stricken Senegalese children.

Mrs. Obama began by telling youngsters who live in a country where 56% of the population lives in destitution that she knows “a little bit about [poverty] from [her] own experience.”  “See, like many of you,” Michelle confided, “I didn’t grow up in a family with a lot of money.”

Mrs. Obama shared that her father, who had MS, “Sacrificed and saved so that he could pay my university tuition.”

Tuition?  Clearly, Princeton and Harvard alumnus Michelle Obama didn’t do her homework before arriving in Senegal in her Zero + Maria Cornejo dress from the Pre-Fall 2013 collection.  The average yearly salary in American dollars in Senegal is $1,070, and Michelle is telling the children that she knows “a little bit about this from [her] own experience?”

In Senegal, 52% of the little money they have goes to buying food. Some of the children Michelle was attempting to identify with probably live in squatters’ shantytowns, of the same style that Obama’s brother George occupies in Kenya.  Although Michelle was sharing inspiring stories of hard work and determination to get an education, for Senegalese children saving up for Harvard is not an option, because any money they have covers the most basic of needs.  We’re talking survival here.

Much like in Obama’s America, in Senegal the standard of living for the poor has declined while the wealthy continue to prosper.

Nonetheless, Mrs. Obama apparently didn’t put off the children, ergo the applause.  In fact, they could have mistaken her for being part of the small group of Senegalese elite, which is made up of businessmen, influential politicians, government ministers, university professors, and members of the (ahem) Socialist Party.

In his book Senegal: An African Nation Between Islam and the West, Sheldon Gellar contends that “the elite group is predominantly male, urban, highly educated, politically connected, and able to afford European-style living standards.” And have wives who wear from Zero + Maria Cornejo’s Pre-Fall 2013 collection.

Yet Michelle Obama, on a $100 million African adventure, rejected Hadiya Pendleton, the deceased victim of Chicago gun violence, elected to leave the “We are just like you” Moneygall schoolchildren in the sub-Saharan dust, and on this trip, chose to see herself in the eyes of children whose parents earn what amounts to $20.57 per week.