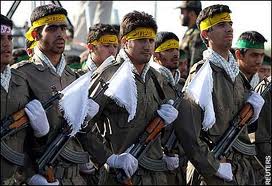 In response to the partisan bickering that exists between President Obama and his political adversaries over things like the budget, Obamacare, and immigration reform, the question raised by many observers is: Why would Obama be willing to negotiate with Iran, but not the GOP?

As it turns out, the answer to that question may have more to do with the president’s and Iran’s like-minded feelings toward America than Obama’s desire to exert his influence on behalf of global harmony.

After all, based on the damage inflicted in just five short years, it’s possible that Barack Hussein Obama is better suited to march alongside the Army of the Guardians of the Islamic Revolution than sit in the Oval Office.

The president’s willingness to participate in nuclear talks with a nation that has expressed genocidal contempt for Israel as well as a desire to eradicate America from the face of the earth is curious indeed, especially when measured against his obstinacy in political debate here at home.

The “Conquest of the American spy den” is another name for the Iranian hostage crisis where 52 Americans were held captive for 444 days after a group of Iranian students overtook the U.S. Embassy in Tehran.

Now it has been revealed that the Revolutionary Guard, the military organization founded in 1979 comprised of 200K soldiers, all dedicated to Shia cleric and Supreme Leader Ali Khamenei, in commemoration of the 34th anniversary of the hostage crisis have composed two songs featuring a “Death to America” theme.

So eager were the Revolutionary Guard to express their passionate feelings towards the “Great Satan,” they performed the songs prior to a massive protest marking the anniversary of the 1979 event.

Quoted from the website of the “elite Iranian regime,” the Revolutionary Guard explained their choice of song lyrics: “The slogan Death to America is the symbol of strength and determination of the Iranian nation against the dominance of the United States, which is an oppressive and untrustworthy nation.”

Recently, while leading a Tehran prayer service, Imam Ayatollah Ahmad Khatami vowed that even while continuing negotiations with America on Iran’s nuclear program, his country would continue to chant “Death to America.”

Ironically, the Revolutionary Guard cites recent “Telephone espionage by the United States government against the people of other countries [as] proof that you cannot trust the leadership of the White House.” Yet, the person responsible for instigating the international intelligence-gathering uproar, as he forges ahead with plans to resume harmonious relations with Iran, apparently exempts himself from any and all spying criticism.

Not for nothing, but isn’t it odd that while the Revolutionary Guard dreams up songs expressing their desire to deliver “Death to America,” political killjoy Barack Obama still eagerly looks forward to participating in nuclear talks with a man Israeli Prime Minister Benjamin Netanyahu called a “wolf in sheep’s clothing,” President Hassan Rouhani?

Moreover, notwithstanding Iran’s general ill will directed toward the West, here at home our ever-eager-to-negotiate 2009 Nobel Peace Prize winner seems to have fewer problems with threats of nuclear obliteration than he does with the Marine Corps wearing masculine headgear and the Navy SEALS sharing a Navy Jack “Don’t Tread on Me” logo with the Tea Party.

As sinister as it sounds, could it be that Barack Obama secretly concurs with Iran’s view of “oppressive and untrustworthy” America?

Then again, perhaps Obama is just so committed to conciliatory outreach that he is able to rise above the taunts of 200,000 Persian bullies. Either that, or the president is convinced that patriots like Senators Rand Paul (R-KY), Ted Cruz (R-TX), Marco Rubio (R-FL), and Mike Lee (R-UT) pose more of a threat to our nation’s future than an aggressive Muslim nation on the brink of going nuclear while swearing to impose “death to America.”

What’s more likely is that during the forthcoming negotiations, Obama will try to convince Iran that the America he envisions is not the same America Iran wishes to destroy. Therefore, based on a mutual desire to accomplish the same goal, Supreme Leader Ali Khamenei’s Revolutionary Guard’s “Death to America” warning may end up being key to a successful Obama/Iranian alliance.

With the president’s antagonistic attitude toward all things American, his revulsion for the two-party system, and his thus-far successful efforts to deliver a deathblow to America himself, it’s conceivable that in Iran, Barack Obama has finally found a nation of kindred spirits.