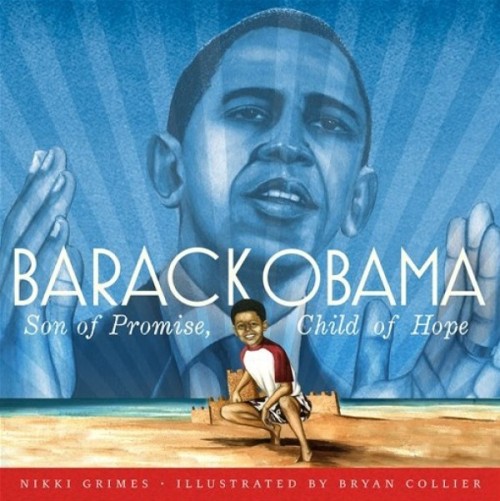 Barack Obama: Son of Promise, Child of Hope, by Nikki Grimes is Common Core aligned reading material for 3rd, 4th and 5th graders.   Lest we forget, Christmas is out, the Bible prohibited, and prayer expunged from the public school arena.

In addition to presenting Barack Obama as god, also welcome in the Common Core curriculum is all manner of liberal brainwashing, progressive propaganda and left-wing mind control.

Even as a child, Barack knew he wasn’t quite like anyone else. Through his many journeys, he found the ability to listen to hope, follow his dreams and become what he was meant to be: a bridge to bring people of all races, religions and cultural background together in peace and freedom.

This is the moving story of an exceptional man who has motivated not only Americans, but people all over the world to believe with him that ever [sic] one of us has the power to change ourselves and change the world.

Wait! Barack Obama is “a bridge to bring people of all races, religions and cultural background together in peace and freedom?”  Is KidzWorld sure they have the right Barack Obama?

Not to mention the part of the review that says he is an  “exceptional man who has motivated not only Americans, but people all over the world to believe with him that ever [sic] one of us has the power to change ourselves and change the world.”  Someone needs to inform the ‘kidz’ that  the only ‘change’ Barack Obama supports is his idea of change.

Nevertheless,  in what is certainly a comical example of irony, teachers signing onto the at the website TeachersPayTeachers.com in hopes of purchasing the lesson plan for Barack Obama: Son of Promise, Child of Hope found themselves meeting up with broken promises and lost hope.

Similar to what millions have already experienced on healthcare.gov,  teachers may have thought they were shopping for health insurance because just like the Obamacare marketplace enrollment process it looks as if TeachersPayTeachers.com was experiencing  difficulty accessing both the lesson plan and Prezi  the highly-touted storytelling software .

Unfortunately, with all the promised ‘promise’ and hopeful ‘hope’ teachers trying o download the lesson plan met with the type of frustration common to all things Barack Obama:

And so, thus far, despite the ongoing effort to indoctrinate America’s children, and notwithstanding the powers that be turning  their back on the God of the Bible, it appears as if divine intervention is still operating on behalf of the remaining faithful amongst American people.

God Himself has already revealed, by way of a faulty website, the lies associated with Obamacare.  And now, as Obama acolytes in the educational system prepare to mandate for our children brown shirt uniform-style Common Core conditioning another website is making it difficult for teacher drones to download the false messiah tools of their trade.

That’s why, as it turns out, this Christmas, much to the chagrin of Barack Obama’s army of secular humanists, America is reminded that there is still only one Son of Promise, one Child of Hope and His name is not Barack Obama!