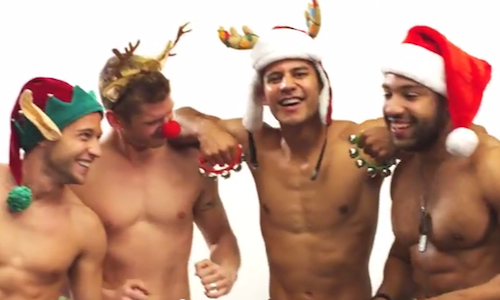 If America has any question whether or not our nation is in a moral and spiritual death spiral think about this:  Phil Robertson of Duck Dynasty has been publicly chastised for exercising his First Amendment right to express his opinion and his faith.

Meanwhile, a group of gay men clad only in Santa Claus hats, reindeer ears, and tight boxer shorts which, by the way, provide a disturbing outline of their junk, shill for Obamacare and it is viewed as adorable.

With debauchery the new norm, and to placate the debauched, a major cable news network spanked a godly man for nothing more than his unvarnished honesty and adherence to traditional Biblical principles.

Sodom and Gomorrah was destroyed for less!

What does it say about where we are as a nation when a man that sits at the head of a family table, bows his head and thanks God for His bounty, His blessings, and for the love of his family is viewed as hateful?

Especially when, 180-degrees in the other direction, with blatant sexual innuendo, gay OUT2Enroll elves jingling their bells encourage the LGBT community to sign up for Obamacare and it’s viewed as a holly-jolly public service announcement.

The homosexual community is outraged that a man with strong beliefs, similar in intensity to theirs, comes out, as they have, and expresses his opinion, like they do. Why isn’t his religious fervor and zeal for what he believes not given the same respect as the fervor and zeal of those who proudly announce the glories of having nontraditional sexual preferences?

Regardless of who you are, gay or straight, and whether you agree with Phil Robertson, or the gay elves dancing around in the tight underwear and candy cane striped knee highs, every American should be chilled to the bone.

When an American citizen is deprived their  First Amendment right to free speech and religion, and liberals become the interpreters of the Bible and US Constitution.

Sober reflection is in order because, like it or not, all of our freedoms are in dangerously close to being taken away.