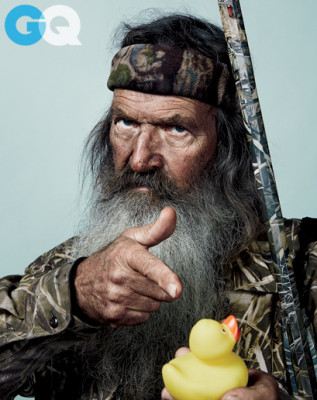 So Phil Robertson, patriarch of the Duck Dynasty, was put on hiatus from A&E after a GQ reporter revealed that Phil had dared to exercise his First Amendment right to free speech and religion.

Robertson, who is anything but bitter and is unapologetic about clinging to ‘guns and religion,’ spent the lion’s share of the interview expressing his views on God and His creation, sin, repentance, and preaching the Gospel of Jesus Christ.

Drew Magary, the author of the GQ article entitled “What the Duck?” rode with Phil in a camouflage-colored ATV to a hunting destination where no-nonsense Phil interpreted being with one of the boys as being free to partake of guy-talk.

At one point, Phil, the man who ends each Duck Dynasty episode leading a prayer while sitting at the head of a huge family table, had this to say about homosexuality:

It seems like, to me, a vagina – as a man – would be more desirable than a man’s anus. That’s just me. I’m just thinking: There’s more there! She’s got more to offer. I mean, come on, dudes! You know what I’m saying? But hey, sin: It’s not logical, my man. It’s just not logical.

Besides being brutally honest, Phil thought he was free to share with the “dudes” his personal preference, and what he feels are the biological logistics of the sex act based on his observations in nature. Boy, was he wrong.

Later on, after discussing his views on repentance and mentioning that if the “human race loved each other and loved God they’d be better off,” Magary asked Phil, “What in your mind is sinful?” Phil replied, “Start with homosexual behavior and just morph out from there. Bestiality, sleeping around with this woman and that woman and that woman and those men.”

Clearly Phil Robertson was answering the question and sharing how, in his “Bible thumping” mind, he defines sin, and referenced Scripture to make his case. The Duck Commander big guy lumped adultery, homosexuality, and fornication into one group, then loosely quoted 1 Corinthians 6:9-10 to support his point of view:

Don’t be deceived. Neither the adulterers, the idolaters, the male prostitutes, the homosexual offenders, the greedy, the drunkards, the slanderers, the swindlers—they won’t inherit the kingdom of God. Don’t deceive yourself. It’s not right.

Now, after answering a question honestly and speaking his mind and sharing his faith, the A&E show has kowtowed to GLAAD and an outraged gay community by banning Phil and his duck whistle from appearing on a show that draws 14 million viewers per episode.

What’s striking about the controversy is that there is no doubt that America has devolved into a nation where a woman like Sandra Fluke can go to Capitol Hill and claim that birth control can cost a law student $3,000 per year, beg for the Catholic Church to be forced to ensure free contraceptives and abortion for promiscuous women working and studying in Catholic institutions.

And in so doing, she will earn a congratulatory phone call from the president and sainthood status on the left.

Then, a plainspoken man with a traditional view of life and sexuality is asked a question during an interview, answers candidly, and ends up being called a homophobe, labeled a false Christian by those who typically mock and reject Christianity. And, to top it all off, ends up being indefinitely suspended from a successful TV show merely for sharing his opinion.

It means nothing to the tar-and-feather brigade that Phil followed up his statements on sin by stressing that God does the judging and that as a Christian he’s called to “just love ’em, give ’em the good news about Jesus—whether they’re homosexuals, drunks, terrorists.”

In essence, Phil Robertson’s vilification is a prime example of a nation that no longer protects the right to say what we think. Step outside the politically correct line, or dare to disagree with the gay lifestyle, and the Ministry of Proper Words and Thoughts will make a public example of you.

Phil’s possible dismissal from the Duck Dynasty television show isn’t really about whether the gay lifestyle is right or wrong, it’s about Americans of differing views no longer being allowed to express themselves. Especially if the sentiments reflect a literal interpretation of the Bible.

What happened to Phil is a little bit about Phil, but mostly about a trend in America that forces military chaplains to put away their Bibles. It’s about the word “Christmas” being eradicated from the public square. And it’s about the name Jesus being viewed as incendiary and divisive, and sodomy and lasciviousness being elevated and admired.

But mainly it’s about the First Amendment of the Constitution being controlled by liberal activists who advocate alternative lifestyles with the same evangelical fervor and outspoken pride that Phil Robertson is currently being denied when expressing his faith.

It’s a dangerous time in America when a good and Godly man like Phil is treated with such derision.

A message is being sent that the liberal left’s definition of what’s acceptable and what’s not acceptable to say takes precedence over the Word of God and the US Constitution. 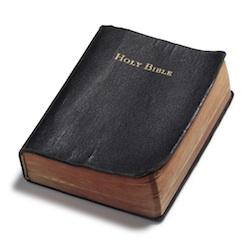