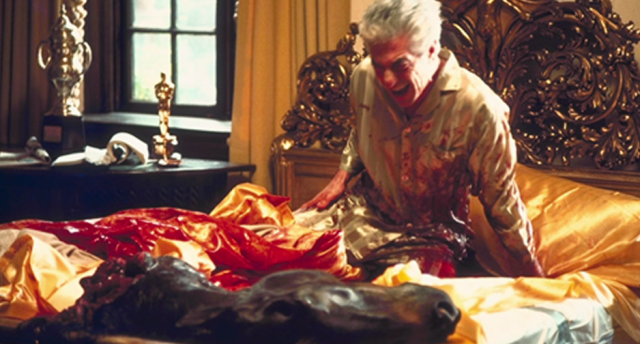 Barack Obama did not place a bloody horse head under the sheets in anyone’s bed.

However, knowing Vladimir Putin’s stance on homosexuality, America’s “First Gay President” — a man notorious for sending in-your-face, non-verbal flips of the middle finger — conveyed a strong message when he sent a US delegation that included openly homosexual representatives to Sochi.

Without uttering one word, the president expressed his disagreement with Russia’s stance on an issue he feels passionately about.

Obama’s message to Putin? Russia’s anti-homosexual views do not warrant US deference. Period.

Evidently, adolescent-types like Barack Obama are unaware that sticking your finger in the eye of an ex-KGB officer is not generally a good idea. Which may be why the Russian president smiled so much at the opening ceremonies in Sochi.

Vladimir knew he had found a way to send Obama a non-verbal message of his own. And based on the expression on the Russian president’s face, the thought was giving him a great deal of personal satisfaction.

The difference between the two messages was that Putin’s communiqué was likely much more infuriating to Obama than tennis star/lesbian Billy Jean King and the homosexual contingency attending the winter games was to Putin.

Down on the floor of Fisht Stadium, Irina Rodnina, a three-time figure skating gold medalist responsible for tweeting a racist picture of Mrs. and Mrs. Obama last year, lit the Sochi cauldron.

That’s right, the woman who sent an offensive tweet that depicted Obama with his mouth stuffed with food, and Michelle sitting beside him staring at a banana Photoshopped into the foreground of the picture, was the same woman who lit the Olympic flame.

In Russia, racist “monkey” insults and assaults on Blacks are so commonplace, African students have stopped reporting them.

That’s why, although Rodnina did delete the tweet, she never felt obliged to offer an apology for the distasteful post.

US Ambassador to Russia, Michael McFaul, disagreed and called Rodnina’s actions “outrageous behavior, which only brings shame to her parliament and country.”

Rodnina, responding to criticism from American friends, had this to say about the controversy:

With that in mind, and in response to vindictive Barack Obama setting the tone by sending a non-verbal pro-homosexual message to Putin’s Russia, Vladimir sent the butt of a distasteful Tweet a missive of his own by rewarding an unrepentant racist with the honor of lighting the Sochi torch.

Moral of the story:  If Obama was going for the gold in tactless and non-verbal finger flipping, Putin flipped back and knocked him out of the lead.