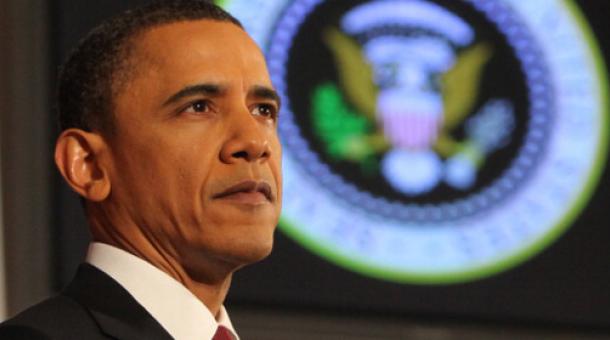 On a campaign swing to raise money to try to keep Harry Reid and the dysfunctional Democrats in the Senate, Barack Obama talked with Hollywood donors about the dysfunction he feels permeates Washington politics.

After flying from DC to California at $228,288 per hour for five-plus hours the president, who has done more damage to America than a toddler driving a bulldozer, cited his list of accomplishments.

First Barack praised himself, then warned that there remains a “disquiet around the country” as well as “an anxiety, and a sense a frustration,” (all of which he thinks has nothing to do with him). Obama also pointed out that “the challenges out there remain daunting and we have a Washington that’s not working” (which he undoubtedly feels is also not his fault).

Adjusting his Nostradamus cap, Obama warned of “a self-fulfilling prophesy” that will befall America if, during the midterm election year, “people who have the most at stake in a government that works opt out of the system.”

Translation:  People who trusted government found out that they couldn’t, and are jumping ship.

Obama continued, “Those who don’t believe government can do anything are empowered [thank God]; gridlock reigns, and we got [sic] this downward spiral of even more cynicism and more dysfunction” – all directly related to the disaster Barack Obama hath personally wrought upon America for the last six years.

And so, according to Barry, “we have to break out of that cycle and that’s what this election all about.”

Agreed!  The midterm election is indeed the first step toward breaking out of Barack Obama’s Cycle of Dysfunction.

Trading his Nostradamus cap for a Planned Parenthood ‘good choices’ t-shirt, the right-to-choose champion then told the group that his prediction of what is “absolutely true is that if we don’t make good choices we could decline, and we’re not going to make good choices unless we break out of this cycle in which dysfunction breeds cynicism.”

Nonetheless, the scariest thing Obama disclosed was that he’s “in trouble at home.” Seems he promised the little woman that the 2012 campaign was his last. Then, recently he informed her “Honey, I’ve got one more campaign I’ve got to run,” which sounds as if hubby may have secret aspirations to hunker down for another term.

As the president raised the topic of inequality to donors paying anywhere from $10,000, to $32,400, to $64,800 per couple a car alarm went off.  Never considering that the alarm was really a hypocrisy buzzer, Obama responded to it by saying, “Sound the alarm, because we’ve got a problem.”

Things got even more dysfunctional when Barack arrived at the Century Plaza Hotel for the USC Shoah Foundation Ambassadors for Humanity Gala, where founder Steven Spielberg presented him with their highest honor, the Ambassador for Humanity Award.

After all, who’s more deserving than a president who funds and supports aborting unborn and occasionally born-alive babies and cares little about the millions of gravely ill, financially-strapped Americans who’ve been thrown off their health insurance?  And isn’t there a special award for leaving four Americans to die in a preventable terrorist attack?

Spielberg is right; the president is a humanitarian. Barack Obama is humane to promiscuous women, illegal immigrants, terrorists, the Iranians, drug cartels, and downtrodden ingrates.

No friend to Israel or the Jewish people, Obama accepted the award and remarked that Spielberg’s “masterful” movie “Schindler’s List” reminded us all that the “Holocaust was not a matter of distant history or abstract horror.”

Speaking to a room full of equally-dysfunctional people, the president felt moved to address the “rising tide of anti-Semitism around the world,” which some believe has been exacerbated by Obama’s dismissive attitude toward the nation of Israel.  Yet Spielberg stressed that “In the face of acts of inhumanity” Obama has “helped expose the darkened parts of humanity to a little more light.”

What Spielberg forgot to mention was Obama’s repeated disrespect of the Israeli prime minister, his failure to deal with the nuclear threat posed by Iran, his Secretary of State calling Israel an “apartheid state,” and Barack Obama blaming Israel every chance he gets.

Then, to add insult to the dysfunctional absurdity of Barack Obama receiving an Ambassador for Humanity Award, Bruce Springsteen was on hand to perform a very apropos acoustic version of “Dancing in the Dark” while funnyman Conan O’Brien emceed and told “ObamaJam” jokes.

So if America is wondering just how dysfunctional things are or can get, the answer is: very!