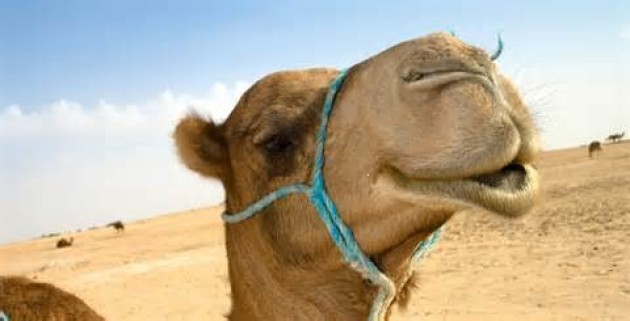 Now that animal “racism” is finally being exposed, lumbering beasts of burden like camels are being evicted from events in order to maintain a cohesive attitude of inclusiveness on college campuses.

That’s what happened at the largest private institution of higher learning in Minnesota when St. Thomas University decided to cancel an annual end-of-the-year event hosted by the university’s Residence Hall Association called, of all things, “Hump Day.”

As an added bonus, students will be spared exposure to Middle Eastern Respiratory Syndrome (MERS), which is now in the U.S. MERS warnings include avoiding the drinking of camel urine, which may be responsible for spreading the disease in the Middle East. So thank God “some passionate students” at St. Thomas University complained that bringing a camel to the Milwaukee campus could offend Middle Eastern cultures, because many lives may have been saved.

MERS or no MERS, “Hump Day” had planned to feature “a petting zoo type of atmosphere” where hump-friendly students could have their photos taken with a real live camel.

Aaron Macke, the group’s advisor and director of residence life at St. Thomas, shared that the day was originally supposed to be fun and bring people together. A sensitive Macke spoke out and said, “If this is going to be something that’s divisive, then it’s not worth doing.”

St. Thomas is a Catholic university committed to diversity, which makes one wonder why their institution is named after a male saint and associates itself with a religion actively involved in the “war on women”.

Moreover, the RHA slipped a racist reindeer with antlers onto campus in December and worse yet, a mechanical bull (if you can imagine) that bucked up a storm at an extremely racist “Southern Hospitality” event earlier this month. In April there was an Easter egg hunt, which clearly discriminates against Jews, Muslims and infertile women.

The university’s website claims that the goal of diversity at the liberal arts college is to “strive to create a vibrant diverse community in which, together, we work for a more just and inclusive society.” St. Thomas also prides itself on its commitment to “create and maintain a climate that affirms diversity of persons as well as diversity of views.”

That commitment to diversity entails:

[i]nclusion… support of individuals from all groups, encompassing the various characteristics of persons in our community. Among these characteristics are race, ethnicity, national origin, gender, age, socioeconomic background, sexual orientation, geographic and linguistic background, religion, and physical ability.

With such an exhaustive list one can understand, after “Protest Hump DAAAAAAY!” showed up on Facebook and more than 100 hypersensitive students voiced their concern, why the lumpy guest of honor was sent packing.

It started with anxiety over spending $500 so students could straddle a camel (hopefully with a sterile anti-MERS face mask on) and post pictures on Facebook or Instagram. From there, the cries segued into animal cruelty concerns and finally settled upon camel racism.

RHA president Lindsay Goodwin said in a statement on RHA’s Facebook page that the “RHA’s goal in programming is to bring residents together in a fun and safe environment where all people can enjoy themselves.”

Sure, Ms. Goodwin, but unlike yourself, there are über-sensitive human beings on patrol right now who spend most of their time hunting down and exposing racially offensive situations, and whose goal is to raise awareness, which obviously you and your cohorts are in dire need of.

That’s why Thomas the Apostle must have intervened and inspired Ms. Goodwin to acquiesce and say that “this program is dividing people and would make for an uncomfortable and possibly unsafe environment for everyone attending or providing the program. As a result, RHA has decided to cancel the event.”

If Ms. Goodwin thinks racist camels divide and make people feel uncomfortable and unsafe, the RHA shouldn’t have discriminated in the first place. Why wasn’t the Hump Day event inclusive from the get-go? The RHA could have put in some forethought and featured a more varied group of animals from the continents of Africa, China and Latin America!

Why didn’t the animals represent all of the races, ethnicities, national origins, genders, ages, socioeconomic backgrounds, sexual orientations, geographic and linguistic backgrounds, religions, and physical abilities of all the students planning to attend Hump Day?

That way, the racist, special-event camel could have been there too and been spared the humiliation of being rejected by a school whose mascot is a male, sexist tomcat named Tommy.