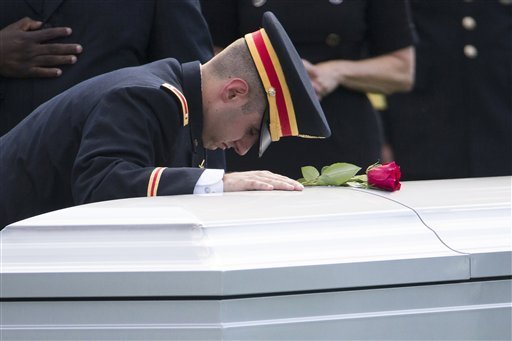 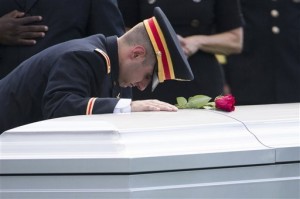 Despite occasional outbursts of “overwhelming grief,” what America has learned over the last six years is that Barack Obama is neither an indiscriminate tear-shedder nor is he an equal-opportunity funeral-attender.

President Obama admitted that he wept while watching his “girl” Oprah star in the film “The Butler,” and also openly sobbed while bidding adieu to campaign staffers after the 2012 election.

As for funerals, the ones he does choose to attend seem to be public statements about what he supports versus what he denounces.  Remember when just a few inches away from Michelle’s disapproving eye, Obama wiped warm salty ones away at civil rights leader Dorothy Height’s funeral?

Obama also blubbered his way through the funeral of liberal Hawaiian senator Daniel Inouye. Instead of choosing to hit the links that day, the president attended the senator’s memorial service and graced Inouye’s family with both his tears and presence.

The president did fly home to Hawaii the month after he was first elected to scatter grandmother Madelyn Dunham’s ashes in Oahu.

However, Obama’s Aunt Zeituni, the illegal immigrant who lived in a South Boston housing project, apparently wasn’t as highly esteemed in her nephew’s eyes as Granny Dunham. In lieu of making a personal appearance, the president helped pay Zeituni Onyango’s funeral expenses, sent condolences, and memorialized his Auntie while out golfing.

The president also chose golf over attending the wake of conservative anti-communism Polish president Lech Aleksander Kaczyński, who died in a plane crash in western Russia, along with his wife Maria and an entourage of Polish dignitaries.

Granted, at the time, Iceland’s Eyjafjallajökull volcano was spewing volcanic ash, but based on his track record, one would guess that if Obama were invited to attend a Polish celebrity golf tournament he wouldn’t let Eyjafjallajökull stand in the way.

Wait! Obama could send Winston Churchill’s bust back to Britain, but he couldn’t send a high-ranking envoy from his administration to Thatcher’s send-off?

After all, Michelle did manage to make an appearance at the funeral of a 15-year-old victim of Chicago gun violence, Hadiya Pendleton.  Prior to extending an invitation to the State of the Union address, Obama sent a handwritten note to Hadiya’s parents, Nate and Cleo, which they pinned inside their daughter’s casket.  That note was more of a touching extension of sympathy than the parents of four Americans killed in Benghazi ever received.

Barack also sent Michelle as an emissary to Maya Angelou’s funeral, where she got to share that “a young white woman from Kansas … named her daughter after Maya, and raised her son to be the first black President of the United States.”

Unlike how he treated conservatives Lech Kaczyński and “Iron Lady” Thatcher, Obama did send a prominent delegation to anti-American socialist Venezuelan dictator Hugo Chávez’s funeral when he passed away about a month prior to Thatcher.

When it comes to Barack Obama insulting the dead, the funerals of Americans are no exception.

The president chose to fly 16 hours and allowed the State Department to spend $11.5 million for Nelson Mandela’s funeral where, including the time spent taking selfies, he and the first lady spent less than 13 hours on the ground.  But for the funerals of Brian Terry, the Border Patrol agent shot dead with a “Fast and Furious” gun, and ICE agent Jaime Zapata, who was allegedly executed with a gun also provided to his killers by the Obama administration, the president was a no-show.

Most recently, a second round of golf in three days waylaid Obama on the same day that 55-year-old murdered Major General Harold J. Green, the highest-ranking military officer killed in combat in a half-century, was laid to rest.

U.S. Army Major General Harold Greene was buried today at Arlington National Cemetery with full military honors, including a caisson, two escort platoons, casket team, firing party, colors team, and a caparisoned horse. The U.S. Army band, “Pershing’s Own,” played softly as the funeral procession made its way down the long hill past the rows of simple white gravestones to bring General Greene to his final resting place.

Meanwhile, somewhere in Martha’s Vineyard, the duffer-in-chief was putt-putting around on another green.

In fairness, in a speech he gave before signing into law a bill on veterans’ healthcare, Obama did send brief condolences to Green’s family and all Gold Star families who’ve lost loved ones.  The White House’s justification for the president downplaying the general’s death was that because he was a high-ranking military official the president didn’t want to appear to be valuing one person’s life over the lives of every other American, even though he does so all the time.

But talk is cheap.  Based on which funeral he attends and which he sits out, it’s clear Obama does assign significance to the passing of some and not to others. When it comes to shedding tears and attending funerals, black civil rights leaders, left-leaning Hawaiian senators, and victims of gun violence — whose deaths further his anti-Second Amendment agenda — do have more worth when weighed against whether or not he should forego a round of golf or pay his final respects.

What’s obvious is that the president who preaches fairness is actually guilty of favoritism, especially when it comes to attending funerals.

Obama’s partiality is evident whenever a previously-scheduled golf game makes it all but impossible for him to break away, or if the deceased person is a patriot who died in the line of duty, embraces conflicting partisan views, or is a dead foreign leader whose political philosophy President Barack Obama rejects.