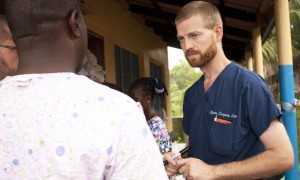 Jesus promised the faithful in Matt 10:39 that “Whoever finds their life will lose it, and whoever loses their life for my sake will find it.” In August I wrote an article entitled “Kent Brantly Lives the Gospel from a Sick Bed. “ In the piece I said I believed that Dr. Brantly, who contracted Ebola while serving as a medical missionary for Samaritan’s Purse in Liberia, would survive the virus because of his selfless, Christ-like attitude towards serving the sick and dying.

After being given a blood transfusion from a youthful Liberian Ebola survivor that Brantly had helped care for and receiving a dose of the experimental drug Z-Mapp, and after being flown from West Africa to Emory University Hospital in Atlanta for treatment, miraculously Kent Brantly did survive a virus that has been known to kill 90% of its victims.

At the time there were some who reacted to my praising Brantly with mockery. The gist of what was being said was that if God helped heal Brantly, why did God let His follower get Ebola in the first place?

I think we now have the answer to that question.

Since returning from West Africa and rising from his sick bed healed and whole, Kent Brantly is being used by God to provide blood transfusions to Americans who’ve been stricken by the Ebola virus.

If Kent Brantly had never gotten and survived Ebola, his blood would not have the antibodies needed by those who might otherwise succumb to the disease.

Unfortunately for Duncan, Brantly offered his blood but the two men’s blood type was not a match. That’s why the Liberian Ebola patient who brought the virus to America, despite receiving topnotch care, subsequently died at Texas Health Presbyterian Hospital where Nurse Nina Pham is now in isolation.

Now we come to find out that the critical care nurse, like Kent Brantly, is also a follower of Jesus Christ, and that her Bible teacher Tom Ha said, “I expect, with the big heart she has, she went beyond what she was supposed to do to help anyone in need.”

So, in what could be a tragic situation, God has provided a faith-building story that hushes the scoffers and reveals God’s power and purpose in the midst of catastrophe.
Little did Brantly know at the time that Liberia would not be the place where his blood would be poured out to save the lives of many.

Instead, it would be here at home, where the virus he survived would become the antidote that would save American lives. And exponentially, for each survivor more blood will be available to save others falling victim to the deadly pathogen that has crossed the ocean with the intent to wreak havoc, death and destruction.

When Kent Brantly was released from Emory he called it a “miraculous day” and then went on to say:

I cannot thank you enough for your prayers and your support. But what I can tell you is that I serve a faithful God who answers prayers.

Through the care of the Samaritan’s Purse and…missionary team in Liberia, the use of an experimental drug, and the expertise and resources of the health care team at Emory University Hospital, God saved my life.

For all those people who ridiculed Kent Brantly’s gratefulness and thanksgiving for God’s healing by snidely asking, “Why, if God loves Kent Brantly so much, did he allow His servant to get Ebola in the first place,” the answer is found in Genesis 50:20 which says, “You intended to harm me, but God intended it for good to accomplish what is now being done, the saving of many lives.”

Kent Brantly’s blood has now been given to three victims of a disease that never should have been in America in the first place.

In 1 Peter 2:24 the Apostle says, “He himself bore our sins in his body on the tree, so that we might die to sins and live for righteousness; by his wounds you have been healed.” Hence, God is using the blood of a man who “died to sin and lives for righteousness” to bring Christ’s healing to the wound called Ebola.