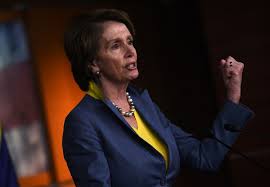 Minority Leader Nancy “Nip/Tuck” Pelosi, the woman who strutted around Washington, D.C. with a king-sized gavel when Obamacare was passed into law, is 74 years old.  Now, in the aftermath of the trouncing the Democrats took during the midterm election, an obvious question has arisen as to whether the granny with the gavel should hang up her dream of another go-round as House minority leader.

So, at a Capitol News conference, in response to a question about the suggestion that the millionaire politician should either take her hefty pension and head home to the City by the Bay or at least pass the House minority leader position to someone younger, Nancy played the trusty sexism card and threw in a smidgeon of ageism accusations for good measure.

Dressed in a tailored soldier blue suit with an uncooperative collar lined in canary yellow, at one point, Nancy became so angry with reporters while trying to say, “As a woman, is there a message here?” that her top lip kept getting stuck on her caps.  In fact, judging by Pelosi’s bulging eyes and garbled speech, it was hard to tell whether her $20,000 necklace was strangling her, she had been hitting the Johnny Walker Red, or she was just majorly ticked off.

The very irate Mrs. Pelosi challenged the press, asking, “When was the day that any of you said to Mitch McConnell, when they lost the Senate three times in a row … ‘aren’t you getting a little old, Mitch?  Shouldn’t you step aside?’

“Have any of you ever asked him that question?

“So, I don’t understand why that question should even come up,” Pelosi said.

Maybe the question hasn’t come up because although soon-to-be Senate Majority Leader Mitch McConnell is not the most vivacious person in Washington, D.C., at least when you put the man in front of a mic he doesn’t say ridiculous things like “Every week we don’t pass a stimulus package, 500 million Americans lose their jobs,” or “Unemployment benefits are creating jobs faster than practically any other program.”

Regardless of McConnell’s age or lack of charisma, he would be hard-pressed to outdo Pelosi’s pièce de résistance: “We have to pass the [health care] bill so you can find out what is in it.”

And that’s just scratching the surface.  Nancy has also provided fodder for jokes by saying that Republicans want to see “women dying on the floor,” that immigration laws are “un-American,” and that she believes natural gas is a cheap alternative to fossil fuel – which is natural gas.

All these things, plus the septuagenarian’s growing inability to express a point without twitching, flapping her hands, and/or stammering, indicate that regardless of whether or not she believes that the Democratic caucus still put their faith in her or that she still (God help us all) has a mission to accomplish, the truth is that Nancy Pelosi should absolutely step down.

Instead, as with all liberal women, Nancy’s response is to play “the war on women card.”  Then, after accusing those who thought she should think about retiring of being sexists, a flustered Nancy stressed that “[her] life and who [she is] is not dependent on being here” or on the cover of TIME magazine.

If that’s true, then why is the minority leader refusing to pass the baton?

Nancy also said, “I have the liberty…if you want me to be here, I’m happy to be here.  If you don’t, I’m proud of what we’ve done together.”

Anyway, what Granny Pelosi said is true.  Thanks to a health care policy that has stripped millions of their insurance plans and their jobs, unlike the rest of us, pro-choice Nancy does have the liberty to make a choice most Americans are being denied.

Which raises the question: why is Mrs. Pelosi being a defensive “Negative Nancy”?  Especially since, when union leader James Hoffa, Jr. accused Obamacare of standing to “destroy the foundation of the 40-hour work week,” it was an optimistic Nancy Pelosi who told CNN’s “State of the Union” host Candy Crowley that joblessness ushers in “liberation.”

Why does Nancy view the suggestion that she should step down or scale back her working as sexism and ageism?  Wasn’t it Ms. Nancy who said that being unemployed is “about wellness … prevention … a healthy America?”

That’s why Leader Pelosi should apply her jobless theory to herself and embrace unemployment with the eager anticipation of someone on the cusp of finding newfound independence and contentment!

With her time freed up, think of all Nancy could do!  The former speaker/minority leader could spend afternoons stomping grapes in one of her Napa Valley vineyards, or she could string imitation Tahitian pearls, or maybe she could follow her true passion by volunteering to answer phones at her favorite plastic surgeon’s Botox clinic.

Nancy Pelosi ought to submit to her own counsel and willingly retire her minority leadership, take down her congressional shingle, and head back to Rice-a-Roniville.  Then maybe she’ll be able to identify with the 100 million Americans who, thanks to the stunning accomplishments of the party Nancy represents, are also now free to follow their passions.