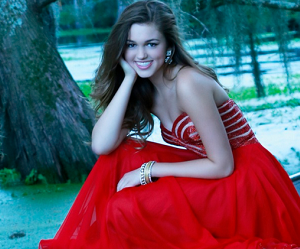 The same week that Mrs. Kanye West was so hungry for media attention that she thought it was a good idea to grease up her derriere and expose it to hundreds of millions of people like a freshly baked loaf of challah bread, Duck Dynasty’s Sadie Robertson was preparing for her next appearance on Dancing With the Stars. Sadie spent the week working together with courteous dance partner Mark Ballas, figuring out how to replace what would typically be suggestive dance moves with decorum and age-appropriateness.

Miss Sadie is on a show renowned for sexy dance moves, twitching butts, hair flinging, and sensuous interaction between dance partners. At times, Dancing with the Stars can make even the most avid double-step pasodoble fan blush and look away from the TV screen.

However, Sadie’s presence on the show has made a bold statement on how unnecessary some of the popular dance show’s suggestiveness is. And as an added benefit, the Duck Dynasty sweetheart is also providing a stark contrast to the likes of Kim Kardashian’s 19 year-old half-sister Kendall Jenner and others like her, all of whom are the antithesis of everything the young Robertson represents.

Sadie Robertson is 17 years-old and epitomizes what a fresh-faced lass should be: lovely, vivacious, talented, and unabashed in her expression of love for God and her desire first and foremost to please Him.

At five years-old, Sadie was nicknamed “the Original” by her dad, Duck Commander CEO Willie Robertson. Sadie even titled her first book Live Original: How the Duck Dynasty Teen Keeps it Real and Stays True to Her Values. The deep-dimpled A&E star explains that the word “Original” in this case “means being the person who God made you to be and not trying to be anybody else.”

In other words, there’s no chance Sadie will ever emulate a Beyoncé pelvic thrust, or be caught lusting after Justin Bieber.

In fact, lights, glamour, and celebrity have not changed this girl in the slightest. Instead, Steadfast Sadie is committed to the philosophy of God and family. Seems Sadie takes after Grandpa Phil, a controversial figure who is unflinching in his adherence to the Word of God and his devotion to truth. Similarly, Miss Robertson adamantly insists on wearing modest costumes on the show, makes it clear when she’s uncomfortable with a dance move, and publicly references her relationship with God with forthrightness and pride.

On the “daddy-approved” costume issue, Sadie had this to say: “That annoys me when people say they’re ‘daddy-approved.’ It’s not that it’s a rule, it’s just out of respect – not just for my dad, but God.”

Imagine that — notwithstanding the opinion of her parents, Sadie is concerned with respecting God.

Back home in Louisiana Sadie keeps in touch with her 18 year-old churchgoing boyfriend Blake Coward, who agrees that sex is for marriage and who she says “is a great guy who really has a heart searching for God.” Miss Robertson doesn’t describe Blake as hot or mention his fashion sense or his hairstyle, because for Sadie, Blake’s kindness and having a heart for God is what impresses her.

What’s also surprising is the deference and respect Sadie receives from her dance partner Mark Ballas. In addition to Mark’s concern to not put Sadie in a position she’d feel uncomfortable with, the DWTS judges have repeatedly commended the teen for how her outstanding ability on the dance floor has never once compromised her strong religious convictions.

Recently, Sadie mentioned in an interview in the Boston Herald that “When I was little, I would pray and ask God to give me opportunities and a platform to be able to share my faith…I would never have imagined it would be this, but it’s been incredible.”

What’s incredible is a child’s being as bold as a lion in her faith and utterly unshakable in her devotion to what is right.

Clearly the Lord is using this young girl to make a statement about chastity, purity, and innocence, and in a world of what Sadie calls “hoochie mamas”, this 17 year-old is a rare and priceless gem to behold. Whether TV viewers realize it or not, God is sending a message to America by juxtaposing Sadie’s light against the dark idolatry and over-sexualized culture American children marinate in.

Face it – America is a nation inundated with Miley Cyruses and young divas like Kendall Jenner, who at 19 years-old lives in her own $1.4 million LA high-rise condo. Kendall, like half-sister Kim Kardashian, publicly bares her nipples on behalf of “fashion,” and as a beverage choice sips bubbly with Hollywood types and rock stars. And then there are the unsupervised, confused celebrity teenagers like Willow and Jaden Smith who, rather than glorify God, espouse Prana energy and “imprinting oneself on everything in this world.”

And then there is the rare and inspirational girl named Sadie twirling and pirouetting on Dancing with the Stars. This well-adjusted, family-oriented kid simply refuses to compromise her principles, respects herself enough to maintain her virginity, and is showing a jaded nation what a happy 17 year-old girl with a pure heart and a wholesome attitude really looks like.