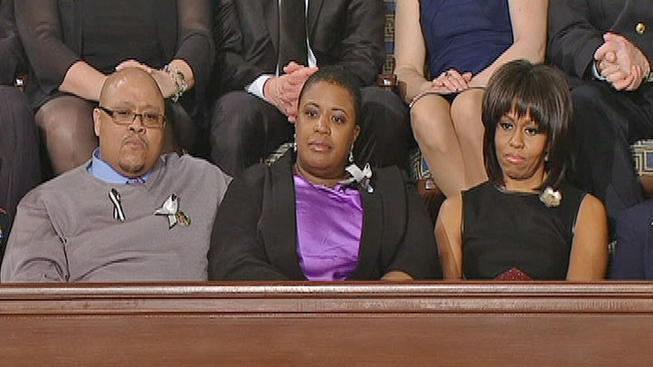 On January 29, 2013, on the South Side of Chicago, while standing with friends in Vivian Gordon Harsh Park, 15-year-old teen Hadiya Pendleton was killed by two youths who shot into the group in an attempt to hit a rival gang member.

At the time, the president was attending memorials and reacting to the tragedies surrounding the Gabby Giffords; Aurora, Colorado; and Newtown, Connecticut shootings, all three of which took place in 2011 and 2012.  Eager to suppress the Second Amendment by exploiting gun violence (while simultaneously promoting and funding unrestricted feticide), and supposedly in hopes of making sure the children are safe, Obama sent wife Michelle to Hadiya’s funeral in Chicago.

In an effort to ratchet up her husband’s anti-gun rhetoric, at Harper High School in Chicago, where several students had recently lost their lives to gun violence, Michelle personally identified with the murdered teen when she uttered the words “Hadiya Pendleton was me, and I was her.”

It was all very poignant and moving.

Then, just weeks after young Hadiya had been laid to rest, to drive home the guns-need-to-be-controlled point, at the State of the Union, sitting right beside Michelle Obama in the Special People/Political-Point-Scoring Skybox, were Cleo and Nat Pendleton.

Hadiya’s bereaved parents listened while the president encouraged a vote for gun reform by referencing their daughter’s love for Fig Newtons and lip gloss and her drum majorette performance at an event celebrating his second inauguration.

Stressing the need for Congress to vote for gun control, Obama told his audience that “Hadiya’s parents, Nate and Cleo, are in this chamber tonight, along with more than two dozen Americans whose lives have been torn apart by gun violence. They deserve a vote.”

Then the president hammered home the point by saying that “Gabby Giffords deserves a vote[.] … The families of Newtown … [and] the families of Aurora deserve a vote.”

Fast-forward to December 2014.  Amid tensions agitated by the guy who seems more amenable to gun violence if it’s taking place during a bout of racial unrest, and with the encouragement of race-hustler Al Sharpton and that converter of lesbians with the biracial son whom he warned to watch out for the NYPD, Mayor Bill de Blasio, two New York City police officers were shot in the head execution-style.

This was not a random shooting.

Just one week before Christmas, citing the deaths of Eric Garner and Michael Brown, clad in camouflage pants and a baseball cap, Ismaayil Brinsley targeted Wenjian Liu, son of Chinese immigrants, and Brooklyn native and aspiring church chaplain Rafael Ramos, solely because they were cops.

Carrying a high-caliber handgun, Brinsley silently approached and fired through the passenger-side window of the police cruiser.  Newlywed Liu and devoted father Ramos, who were working overtime on an anti-terrorism drill, were both mortally wounded.

In the wake of those deaths, the president has had little to say.  Preoccupied by a 17-day Christmas vacation in Hawaii, the man who flew to South Africa for Mandela’s funeral did not allow his golfing time to be disrupted by funerary obligations.  Even Michelle was given a reprieve.  Rather than rush to New York as she did to Chicago when she attended Hadiya’s funeral, the first lady remained in Oahu.

What is odd is that every chance he gets, the president endeavors to weaken the Second Amendment, and yet in the wake of the NYPD murders, Obama seems unwilling to call attention to the rampant bloodshed being perpetrated by angry black youths with racism as their grievance.

It’s also strange is that although he’s the nation’s chief law enforcement official, unlike Michelle identifying with Hadiya, Obama doesn’t seem to personally identify with the assassinated police officers.

After all, if the belief on the left is that “anti-government, pro-gun, xenophobic populism” contributed to the Tucson, Aurora, and Newtown tragedies, isn’t it then the president’s responsibility to acknowledge how expressions of sympathy for the Trayvon Martins and Michael Browns of the world might become an inspiration for Ismaayil Brinsley types to attack and kill cops?

Maybe President Obama hasn’t noticed, but if ever there was a gun-toting, Quran-carrying “bitter clinger,” Brinsley was it!

Furthermore, based on his silence on the subject, the president must not feel it’s necessary to mention that the shooter, who died of a self-inflicted gunshot wound, was part of the paramilitary, San-Quentin-originated Black Guerrilla gang and a Muslim with connections to the Islamic Society of North America (ISNA).

However, all is not lost; as the annual State of the Union address draws near, there’s plenty of time for Obama to redeem himself.

Similar to the respect he gave Hadiya Pendleton’s parents by inviting them to sit in the gallery of the House of Representatives, maybe the president will offer equal time at the upcoming SOTU to the heartbroken teenage sons of Rafael Ramos, Jaden and Justin, and their mother Maritza, as well as the inconsolable widow of Wenjian Liu, Pei Xia Chen.

And what better occasion than a primetime speech for Obama to point out how, despite the stringent regulations his executive orders have sought to impose on law-abiding gun owners, if a thug like Ismaayil Brinsley is bent on murder, acquiring a firearm is still easy to do?

Then, just as the president stressed the significance of saving one child’s life through gun control in a prior State of the Union, this year, Obama can announce new measures to protect the lives of the police officers currently threatened by the disgruntled black youths he and his cohort of race-baiters have so blatantly incited.