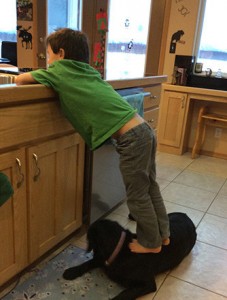 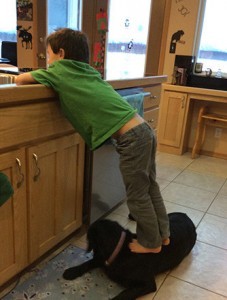 Sarah Palin is under fire again, and not for her Naughty Monkey shoes. This time it’s because of a post on Facebook showing her six-year-old son Trig, a child diagnosed with Down syndrome, to reach an otherwise out-of-reach countertop, “step, baby, step[ping]” on the back of Jill Hadassa, the family’s black Labrador retriever.

Besides the fact that the dog appears totally at ease with the situation and not at all perturbed about providing the elevation barefoot Trig needed to reach the kitchen counter, once again hypocrisy is revealed in feigned outrage  when it comes to what’s acceptable and what’s despicable.

PETA woman of the year Ellen DeGeneres’s adorable Facebook posts aside, the reality is that labs are service dogs – good-natured, loveable, and strong.

One service dog website, anythingpawsable.com, described the breed this way: “Once you’re ready to face the world, they’ll always be by your side, shoring you up, no matter what you’re doing or where you’re going.”

And shoring up Trig is exactly what this wonderfully sturdy dog did.

And while standing on a dog isn’t something that one should make a habit of, the larger issue here is not whether Trig balanced his little body on the Lab; it’s that there’s just something wildly hypocritical about a group of individuals who largely support unborn baby abuse alleging dog abuse.

After all, in the group doing most of the criticizing, having an extra chromosome like Trig Palin is usually the only “stepping stone” needed to support the decision to dispose of unborn life.

So while radically pro-choice politicians like Barack Obama might be praised by animal rights groups for treating his dogs Sunny and Bo better than he treats humans, pro-lifers like Sarah Palin, a woman who defends the sanctity of life, is being condemned for allowing a barefoot child, determined to wash the dishes, to use a dog for a stepping stool.

Let’s just say that because of Sarah’s Facebook post, the “Save the Whales” activists came out of the woodwork for the ethical treatment of Labrador spines.

People for the Ethical Treatment of Animals called Palin’s New Years’ Day post unfitting, saying, “It’s odd that anyone — let alone a mother — would find it appropriate to post such a thing, with no apparent sympathy for the dog in the photo.”

Maybe PETA would have more credibility if they expressed concern over the unethical treatment of all mammals, including unborn baby humans, who are burned, suctioned, and dismembered by mothers concerned for their own convenience and not for their own offspring.

PETA president Ingrid Newkirk had this to say: “Then again, PETA, along with everyone else, is used to the hard-hearted, seeming obliviousness of this bizarrely callous woman.” The “callous woman” Ingrid is talking about is Sarah Palin, who, according to the saviors of eagle eggs, had the audacity in 2008 to grant an interview from a turkey farm where turkeys were being slaughtered.

PETA takes no official stand against abortion; and as long as members defend the life of non-human animals like turkeys, flies, and, any day now, amoebas, they can be either pro-choice or pro-life. Which means that just as long as it wasn’t in a turkey slaughterhouse, PETA would have reserved judgment had Sarah given that 2008 interview at an abortion clinic where fetuses were being slaughtered.

Based in Darien, Connecticut, the animal rights group Friends of Animals is headed up by President Priscilla Feral (as in cat). When presented with the frequently asked question What do you mean by animal rights?, Friends of Animals’ online response mentions “conscious beings…[having]…interests that should be respected.” The word “conscious” is code language that in animal rights circles would include the Palin family dog but exclude Trig in utero.

President Feral had this to say about the Palin dog-balancing to-do:

It’s no surprise to Friends of Animals that Sarah Palin is so insensitive she thinks a Black Lab should be tolerant of a child who isn’t told to not put his full weight on top of the dog’s back by standing on him. How lazy of Sarah Palin not to move the dog out of the way and teach her child the right lessons.

What is surprising is how the same people busy advocating for veganism remain insensitive to the reality and tolerant of the tragedy of 3,000 human babies exterminated per day.

What is also surprising is the audacity of people who make excuses for the millions of women who shirk motherhood and call it choice, but label Sarah Palin lazy for praising the disabled son she granted life.

Trig just reminded me. He, determined to help wash dishes with an oblivious mama not acknowledging his signs for ‘up!’ found me and a lazy dog blocking his way. He made his stepping stone.

In the end, the Sarah Palin/Trig/Hadassa debate has little to do with whether it’s right or wrong to stand on a dog’s back and everything to do with the duplicity of the outraged.

As owner of two standard poodles, it is my belief that Palin commending Trig’s practical doggy-maneuver is much less troubling than animal activists who defend the spines of Labrador retrievers, but ignore “oblivious mamas” who deny children the God-given right to human life.