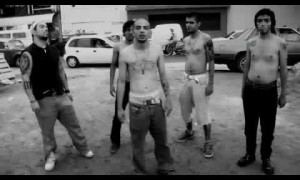 Well, it’s official –illegal immigrants that were hiding in the shadows last year have come out of the shadows and are now happily walking the streets in broad daylight. And what a cultural carnival of absurdity that coming-out party is turning out to be.

As a result, Americans are being culturally accosted by scary gang tattoos and catcalling Latino men riding all over town on rusted bicycles with bent wheels. Muslim women shop in full burquas, Indian women stroll about in saris, and Sikhs balance turbans on their heads and tuck mile-long beards behind their ears.

As for the plethora of Latino illegals now in our midst, there are those who are clearly unaware that, although benign, bowler hats and Peruvian lliklla shawls, as well as black socks, white sandals and second-hand winter coats, typically unnecessary in sunny downtown Oaxaca, are not fitting attire for bus stops and all-you-can-eat buffets.

But in all seriousness, for the most part, no one knows where many of these colorful and eclectic people come from, or who they really are. That’s why, in addition to withstanding a tsunami of cultural heterogeneousness, the personal safety of every American is currently at stake.

What is even more troubling is that it seems like the U.S. government feels inclined to protect the likes of MS-13 gang and drug cartel members and ignore potential ISIS terrorists, sex offenders, and child rapists. Not to mention DHS’s recent decision to release 3,700 illegal top-tier “Threat Level 1” violent reprobates, all of whom were loosed on the U.S. citizenry by the department responsible for safeguarding the security of America’s homeland.

In addition, by now most Americans are well aware that for almost eight years, when not cooking up ways to better integrate undocumented families into unenthusiastic American communities, Barack Obama has been diligently trying to find a way to detach the “illegal” from the term “illegal immigrant.” In Strengthening Communities by Welcoming All Residents: A Federal Strategic Action Plan on Immigration & Refugee Integration, the White House Task Force on New Americans has finally accomplished that goal.

The April 2015 report refers to illegals as either “newcomers” or “foreign-born Americans”.

Yet the real problem with illegal immigration isn’t America’s distaste for invasions or our growing impatience with being subjected to hearing everything repeated in Spanish over the loudspeaker in Target; it is Barack Obama, whose come-one-come-all message to the world says, “everyone willing to work hard and play by the rules is welcome.”

And while all of Obama’s rhetoric sounds idyllic, sadly, as a result of his lackadaisical upside-down worldview, millions of undocumented settlers with less than laudable motives have taken advantage of the opportunity to infiltrate our borders looking to expand their selection of prey.

Maybe someone needs to inform the president that, regardless of how hard a person is willing to work, wading across the Rio Grande in the dead of night and defying the immigration laws of a sovereign nation isn’t exactly what most people would consider “playing by the rules”.

Case in point: While Obama was feverishly planning his “New Americans Project”, MS-13 unaccompanied minors/DREAMers Joel Escobar, 17, Jose Cornejo, 17, and Bryan Larios, 18, all three of whom are considered “new Americans,” expressed their heartfelt gratitude to the president by gang-raping a 16-year-old girl.

And why shouldn’t these three just take what they want?

After all, if an illegal desires to live in another country and then, with the chief law enforcer’s approval, successfully steals his way over the border into that country, why wouldn’t that same illegal think that, if so inclined, he could just as easily get away with violating the physical borders of a woman?

That sort of perverted thinking may be why, as the president prepares to officiate civically, economically, and linguistically integrating sex-offenders, sleeper cell members and gang members into “welcoming communities”, three Obama-approved new American DREAMers felt comfortable fracturing the ribs of the male half of a couple they encountered on an out-of-the-way drawbridge on Long Island.

And as Obama’s presidential taskforce anticipated working to “increase awareness of the contributions of new Americans to our country”, in the middle of the afternoon new Americans Escobar, Cornejo and Larios were busy stealing the couple’s cash, purse, iPhone, and iPad.

In hopes of making the type of lasting contribution to America Barack Obama and his taskforce celebrate, the El Salvadorian national newcomers then marched the female half of the couple they just robbed to a wooded area a half-mile away. Pretending to have a gun, once they got her there they stripped her naked and proceeded to take turns “brutally and barbarically” raping her while the others kept watch.

After the foreign-born newcomers finished taking more of whatever they wanted from America, golfers from a nearby golf course found the victim roaming around wearing nothing but the socks the rapists forgot to take with them when they ran off.

In the end, as our president pursues the “fundamental transformation” of our neighborhoods, our cities, our nation and ultimately our world, the saddest part of this story is not the busted bicycles, the burquas, or the bowler hats we see everywhere we go. Neither is it the dismantling of American law and the erosion of our personal and national safety.

No, the saddest part of this story and many more like it is that, if this horrific gang rape by illegal aliens had to take place somewhere, it should have taken place on the White House lawn. Because if it had, the responsibility for the ongoing rape America is figuratively being forced to endure would finally be placed on the doorstep of the person ultimately to blame.