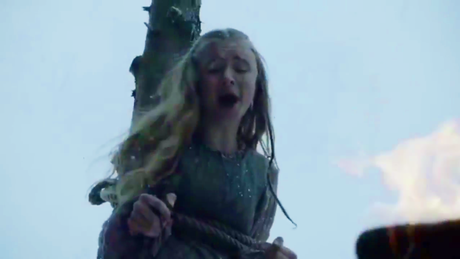 Fans of Game of Thrones were appalled when, in episode nine of season 5, “The Dance of Dragons,” Stannis Baratheon, head of House Baratheon of Ironstone, and his wife Selyse exercised the right to choose and did to their daughter Shireen what 4,000 women in America do every day.

In pursuit of personal destiny they sacrificed their child.

Prior to agreeing to allow his daughter to be set on fire by Melisandre, a controlling witch who serves a Prince of Darkness masquerading as the Lord of Light.  Red Priestess Melisandre promises Stannis that if royal blood is shed, the Lord of Light will ensure that the power he seeks to seize the Iron Throne will finally be his.

Eager to have the snow storm that keeps his army from storming Winterfell clear, and knowing full well that a sacrifice was needed to accomplish that goal, before her death, Stannis tells Shireen, “If a man knows who he is and remains true to himself, the choice is no choice at all. He must fulfill his destiny and become who he is meant to be no matter how much he may hate it.”

And isn’t that exactly the lie that those who choose abortion believe?

Pro-abortion advocates are convinced that filicide permits a person to be true to themselves, and that making the choice to dispose of one’s offspring, no matter how hateful that act may be, somehow guarantees that future destinies will be fulfilled.

The truth is that the character Stannis Baratheon is a weak, sorry excuse for a human being whose quest for power is greater than his love for his less-than-perfect daughter. And Shireen’s sickly mother Selyse is no different. Selyse, who stores the bodies of her three stillborn sons in crystal containers, is so enamored with the Red Priestess’ fire god that she agrees to hand over her only living child to be burnt at the stake.

While both stunning and shocking, the visceral reaction to the scene where the Red Priestess sets Shireen on fire provides a graphic fictional depiction of a very modern-day practice.

Game of Throne’s writer/executive producer/director Dan Weiss apparently doesn’t see it that way. Weiss feels that Melisandre’s irrational influence on Stannis “gives … a window into the heads of people who believe irrational things on faith.”

While that may be true in fantasy literature, Melisandre’s irrational influence on Stannis provides another “window into the heads of people” who have been and continue to be willing to practice their humanistic religion by sacrificing their children on an altar called abortion.

And so, thanks to HBO, viewers received a hardcore dose of reality and a peek into the illogical pro-choice mind that believes killing your child is justified if it grants you the joy of an imagined destiny.

Just prior to being handed over for sacrifice, while reading “The Dance of Dragons,” Shireen has a tender, heartfelt moment with her father. It’s during that interaction that Stannis tells the little girl whose face is stricken on one side with stony greyscale, “You do not belong across the world with the bloody Stone Men. You are the Princess Shireen, of House Baratheon… and you are my daughter.”

Viewed by most as unclean, Shireen is so touched by her father’s kind and loving words that she repeats who she is and tells him that as his daughter she wants to help him regain the seat of power. Little did the princess know that the offer would entail the shedding of King’s blood – hers.

Soon after, the viewers see the tiny girl clutching the wooden stag given her by her beloved friend Davos being led in the falling snow toward a sacrificial pyre by Melisandre, who carries with her a flaming torch.

Shireen realizes that the fire is for her and begins to panic. 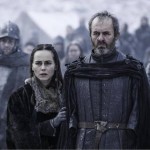 Both Stannis and Selyse stand expressionless, and watch as their only living child is led to her death. From the depths of her soul, little Shireen begins to call out for the two people she believes will help her – her mother and father.

Melisandre prays out loud to the Lord of Light and speaks of cleansing by fire as a kicking and squirming Shireen is dragged by soldiers to the woodpile. As the child is tied to the post, the sorceress coldly reassures the hysterical princess that “It will all be over soon.”

Torch in hand, Melisandre lights the fire and as the flames lick about the girl’s feet, the terrified victim pleads for help from the two people who should never have been killing her.

Then, unexpectedly, power-hungry Selyse, who originally thought sacrificing the child she emotionally abandoned was a good idea – had a sudden change of heart. Pulling on Stannis’s arm, she asks her husband to stop the execution. But a stalwart Stannis, mesmerized by magic, mumbles on about “King’s blood” and remains unmoved.

In a feeble attempt to save the girl, motherly instincts kick in and Selyse heads toward the pyre, but is thwarted by Baratheon soldiers. Powerless to stop what is happening, Selyse drops to her knees and watches as the fire consumes her daughter.

Because of the Red Priestess’ demonic inspiration and her parents’ personal ambition, the princess’s screams quickly turn into shrieks of agony and then abruptly stop as the flickering flames ravage her frail frame.

The image of Shireen crying out in vain for her mother and father to save her was powerful imagery indeed.
But even more haunting was the look on the faces of Stannis and Selyse, whose subsequent tears indicate that, although usually emotionless, they realized too late that attaining what they believe is their God-given calling may not have been worth the loss of their daughter.

And so, ironically, by burning Shireen alive, the producers of Game of Thrones’ “The Dance of Dragons,” made what was thought to be a statement about the irrational nature of religious faith. But instead, an unintended metaphor left astute viewers with a challenging message about aborting children for personal gain.