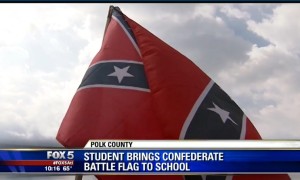 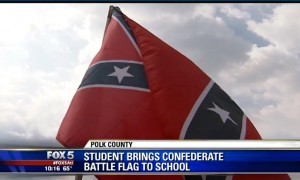 One week after the nation learned that disassembled clocks that look like bombs can be brought to school if you live in Texas, a 10th grade student in Polk County, Georgia did the unthinkable and showed up at school with a Confederate flag.

The boy arrived at Rockmart High School with the flag pinned to his backpack. According to Principal Wesley Cupp, the Caucasian wrongdoer “got dropped off out of his truck and came down the sidewalk just like any other student does.” From the sidewalk the student walked through the cafeteria and into the courtyard with the Confederate flag draped over his backpack.

This wasn’t a briefcase; it didn’t look at all like a bomb; and it didn’t beep, tick, or buzz. And thus far there’s no word whether the culprit wrapped in the “Stars and Bars” is the son of an activist Muslim imam.

In the school courtyard the kid with the flag encountered two African-American students who immediately confronted him for showing up with a hateful and insensitive flag that is now deemed far worse than a clock that looks like a bomb.

According to Cupp, as if they didn’t know, the black students approached the white boy because they “wanted to confront [the flag bearer] about what he had on his back pack.”

Principal Cupp reenacted the exchange in the following way: “What did they say? ‘Hey man why you doing that?’” A scuffle then ensued involving the black boys and the flag-bearing white kid, all three of whom were shoving each other around until the staff broke the fight up.

The Confederate flag instigated the unrest, but no weapons were found. Nonetheless, in order to make sure that there were no other Confederate battle flags on/making their way to campus the school went into lockdown and the students were put through a drill.

About the school going on lockdown, Mr. Cupp said “We just did that as a precautionary situation to help maintain and control what could have been a bad situation.”

The principal attempted to drive home the point that the commotion had nothing to do with freedom of speech, and said that all three students involved were suspended. “When you become a distraction where students can’t learn because of a distraction then that needs to be removed,” said Cupp.

One fair-minded resident was relieved that both the black boys and the white rebel flag-bearer were suspended.

Another resident opined that the offended students should have taken a different approach. Polk County resident Betty Dodd agreed. Betty said that instead of resorting to fisticuffs, “If they had a problem with him having the confederate flag on his backpack they should have went [sic] to the authorities and talked to the authorities.”

Then what, Betty? After calling the authorities, instead of getting a Tweet from Obama and a scholarship to NASA space camp, would the kid with the flag on his backpack have been frog-marched off school property to spend the afternoon in the clink for dressing like Charleston shooter Dylan Roof?

Either way, Principal Cupp assured worried residents that after the suspension the three students will be offered psychological counseling and other services in hopes of addressing and lessening the friction.

So there you have it. In the new America a kid named Ahmed Mohammed throws together a pencil case clock that looks like a bomb, takes it to school and becomes an instant social media sensation. As a result of the misunderstanding, Ahmed receives an invitation from Obama to visit the White House, and concern over the suspicious-looking science project is deemed discrimination against Muslims.

Meanwhile, a white kid ties a confederate flag to his backpack, is attacked on campus by two black boys and participates in the scuffle, leading the school to go into lockdown. And instead of going to the White House like bomb-clock boy, the white kid is told to put away his flag and go see the school shrink.
Read more at http://clashdaily.com/2015/09/at-least-it-wasnt-a-clock-bomb-a-georgia-high-schools-confederate-flag-lockdown/