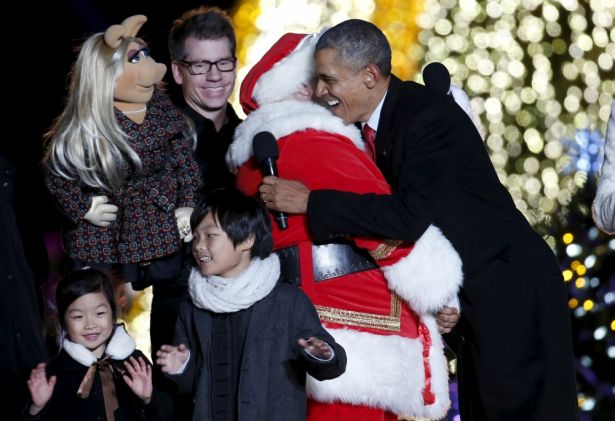 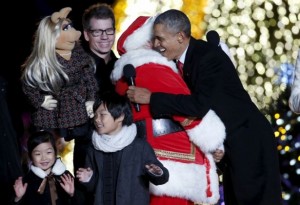 In keeping with the holiday spirit, one day after 14 people in San Bernardino, California were slaughtered like animals while standing around a buffet table eating Christmas cookies, on the Ellipse south of the White House, Barack Obama and the first family attended the 93rd annual National Christmas Tree lighting ceremony in D.C.’s President’s Park.

As the national tree lit up, Obama yelled: “Five, four, three, two, one.  Merry Christmas, everybody!”

Thankfully, Barack did not allow 14 bullet-riddled bodies lying in a morgue stop him from enjoying the star-studded festivities.  After all, this is America, and in America, despite terrorism, there are still things to get excited over.

Take for instance, Michelle and Miss Piggy reading “The Night Before Christmas” together.

Also celebrating the season with the president were the “irresistible” rock band Fall Out Boy; Andra Day, a glamorous Rihanna look-alike donned in a glittery 1930s-style gold headscarf; and a California hip-hop artist named Aloe Blacc, who managed to stay warm at the event by wrapping himself in a scarf handmade by a fan in Uganda.

The only thing missing from the party was Michelle Obama dancing to “Uptown Funk” performed to the beat of “Rocking Around the Christmas Tree” by Mary K. Blige.

In fairness, the president did take a moment to mention the 14 dead and 21 wounded in the California terrorist attack when he said:

Their loss is our loss, too, for we’re all one American family. We look out for each other in good times, and in bad. And they should know that all of us care about them this holiday season.

After the tragedy that took place less than 24 hours prior, the whole affair was likely just an effort by an exquisitely sensitive president to buoy the spirits of a grief-stricken nation.

In fact, consoling the downtrodden had to be the primary reason Obama decided, albeit reluctantly, to slip into Al Green mode.

Standing beside a socialist Santa Claus, the president struck up the band, pointed his bony finger like a conductor’s baton, and proceeded to lead the revelers in a jolly rendition of “Jingle Bells.”

Meanwhile, in San Bernardino, California, the names and pictures and personal life stories of those who will never go to another tree lighting ceremony, or sing “Jingle Bells” ever again, were made public by authorities.