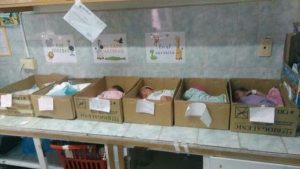 Lately, a shocking percentage of American voters are eager to have a government that fails at everything from healthcare to illegal immigration put in charge of controlling more stuff.

Meanwhile, 2,800 miles away in Venezuela, the consequences of such wrongheaded thinking is starkly revealed in pictures of sleepy newborns snoozing in cardboard boxes in a maternity ward with no money for nursery bassinets.

The row of babies in boxes is a glaring example for socialist-minded American millennials that Marxism is not as glamorous as some politicians would have us believe.

That’s why, in hopes that the extent of his country’s healthcare catastrophe would be exposed to the world, a brave Venezuelan doctor anonymously leaked the photos of the infants in boxes to opposition lawmaker/Congressman Manuel Ferreira.

The truth is that oil-rich Venezuela was once a prospering nation. Now, except for a small group of political elite, the economic playing field has been leveled and ‘the wealth spread around,’ which has made everyone, including newborns, equally poor and miserable.

Yet rather than abort children for economic purposes, an excuse used by those convinced that being underprivileged is worse than being dead, at least thus far, pro-life Venezuela has not allowed paucity to preclude the right to life.

And so, from a maternity ward in the hospital Domingo Guzmán Lander, in Venezuela’s northeastern state of Anzoátegui, abortion advocates have gotten a message that, regardless of hardship and desperation, human beings still deserve to live.

Simply put, as bad as economic conditions may be, breathing infants sleeping in empty fruit crates are still a whole lot better off than aborted fetuses smoldering in trash heaps.

But the message out of Venezuela is two-fold.

One stresses that conditions should never determine sanctity of life and the other illustrates that free, government-run health care systems are doomed to fail. That’s why Americans who prefer régime ownership to private enterprise should take note of what happens when the central government promises to run things.

According to Ferreira, in maternity wards located in what were once Venezuela’s leading hospitals:

Mothers are not fed properly and babies are born really weak. On top of that, the shortage of medicines and vaccines creates a mortal situation that is like a death cocktail.

In fact, as the box baby images were made public, across town at Anzoátegui’s Luis Razetti Hospital, where 17 newborns died last year because of an opossum infestation, 15 newborns recently died because of lack of food and medicine.

Douglas León, the president of the Venezuelan Medical Federation (VMF) admitted that hospitals are operating with only 5% of the medical equipment needed. In fact, in the last four years, Venezuela has lost 20% of its medical staff as the best doctors flee the country.

Redistributive social policies made lofty promises to the Venezuelan people, so how did a nation with the world’s largest oil reserves get here?

As usual, rather than impart fairness and fix things, Marxism’s failure repeated itself and, instead of economic justice, inflicted misery on millions of people.

The downward spiral began under the administration of the late Hugo Chávez, where, from the start, the promised panacea of socialism proved to be no panacea at all. Then, in 2014, under Chávez’s successor Nicolás Maduro, global oil prices plummeted and things got worse.

As a result, the collectivist government that vowed it could deliver socialist utopia to 30 million people found itself with no money to provide staples like food, medicine, and toilet paper.

That’s why, besides newborns being forced to sleep in cardboard boxes, the Venezuelan people also suffer waiting in a line for half a day to buy a loaf of bread. The citizens of what should be a tropical paradise undergo rolling blackouts due to electricity shortages and endure water rationing, hyperinflation, and not being able to find a single Tylenol.

Meanwhile, rest assured, that if Nicolás Maduro Guerra, the only son of socialist president Nicolás Maduro, were a newborn, he would not be napping in a cardboard box, nor will he be forced at age twenty-six to eat dog, horse, or butcher zoo animals to survive.

Speaking of animals, according to the Venezuelan Pharmaceutical Federation, because of the 80 percent shortage in every kind of common and specialized drug government paid healthcare workers have resorted to using veterinary medicines on human beings.

Worse yet, empty grocery shelves and critical shortages in every basic need has resulted in an epidemic of violent crime, kidnappings, bloody protests, fatalities, human rights abuses, and, especially in the capital city of Caracas – the very thing the anonymous doctor feared – political oppression.

In defense of his government, Carlos Rotondaro, the country’s director of social security angrily reacted to the photos of the babies. Rather than blame the lack of nursery bassinets on a failed system, Rotondaro accused media manipulation of portraying Venezuela’s bankrupt government-run healthcare system in a negative light.

So, in other words, similar to what happens in the U.S., in socialist countries government goons also refuse to assume responsibility for their failures?

Either way, for those that prefer collectivism to capitalism, Venezuela’s purely man-made predicament provides undeniable proof that no matter how well intentioned it may be socialism always results in abject failure.

As for Venezuela’s now-famous box babies, their silent message is that although neediness can sometimes reduce a hungry person to rummage through trash for food, poverty, no matter how hopeless, should never determine the right to life.