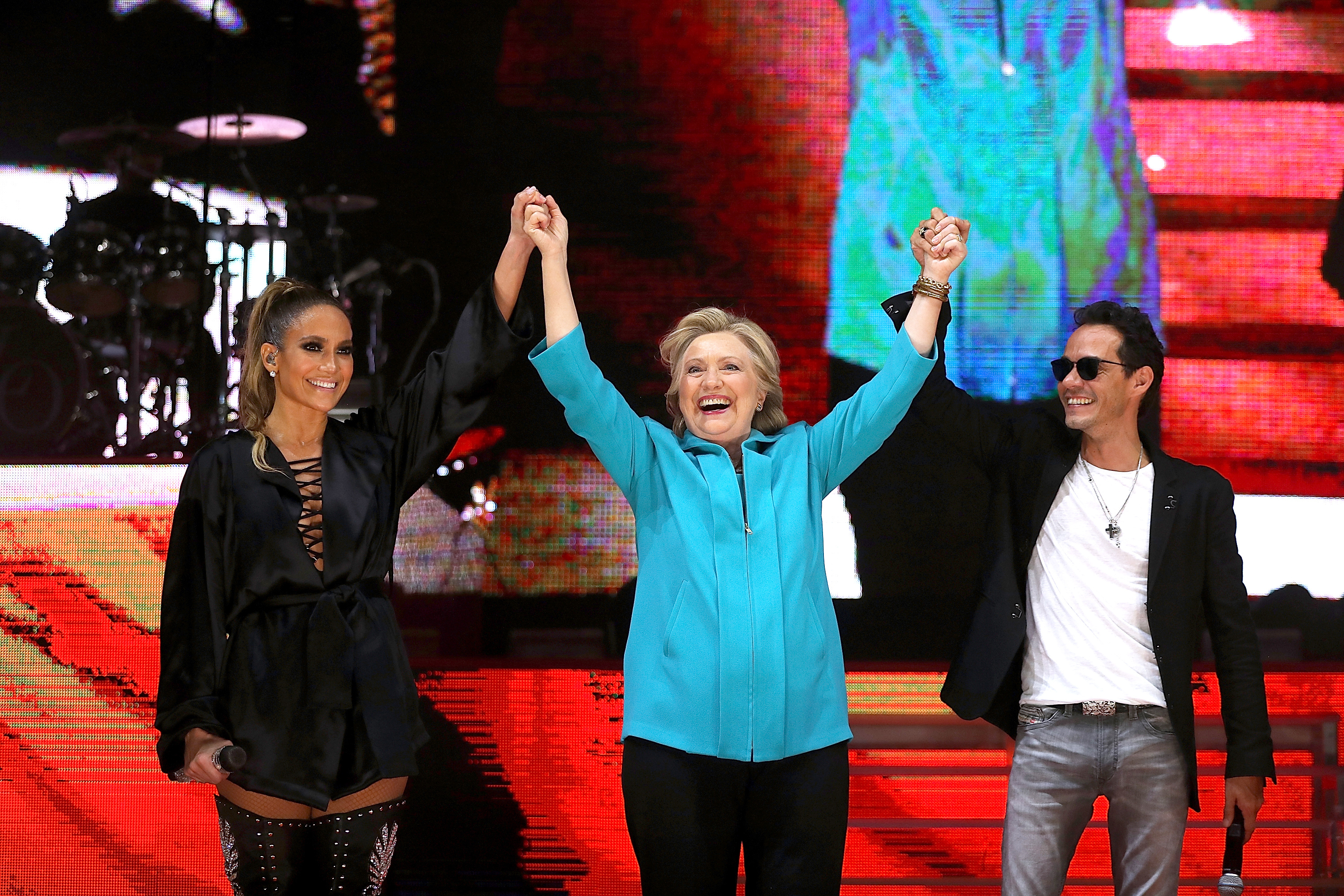 Pop superstar Jennifer Lopez is likely one among many liberal hypocrites appalled by Trump’s treatment of women. That’s why, in support of Hillary Clinton, the man-eating, cradle-robber, and self-promoting hoochie, joined one of her many ex-husbands, for a free outdoor concert at Miami’s Bayfront Park Amphitheater.

To tone down the objectification of women, Jennifer appeared on stage sans pants, wearing only crotch-high studded leather boots and a mini black silk kimono.

To garner Hillary votes, the dancer shook her ample booty like Jell-O and swaggered around in the rain on stage dressed in a half-apron that resembled the American flag. Jennifer even caressed her own thigh while promising to “change things.”

The 47-year-old actress, singer, and dancer performed songs “Let’s Get Loud,” which is what the Democrat nominee does every time she opens her mouth, and “On the Floor,” which is where Hillary spends most of her time laying, where her poll numbers are heading, and where Hillary’s husband Bill’s pants always end up falling.

Confusing the right with the left, and in anticipation of electing the nation’s first president with ovaries, Jennifer instructed the crowd saying, “We have to take the right road to the future.”
Notwithstanding the absence of a high-powered fan to blow J-Lo’s hair around for effect, and Barack Obama not being present to command the wind and rain to cease, the wet weather did not mess up Jenny’s ponytail.

Then, after working up a sweat, Jenny from the Block was joined on stage by Hillary from the cellblock.

After nearly smothering J-Lo with a grandmotherly bear hug, a hoarse Hillary took to screaming at the raucous mob. The presidential hopeful told the wet concertgoers, “No matter what they throw at us, we don’t back down. Not now. Not ever.” Clinton reminded the gathering that there are only ten short days until “the most important election of our lives,” which is exactly what Barack Obama maintained during the last two election cycles.

Rather than spearheading a political uprising, and sounding as if it was time to take a potty break, Grandma Clinton then informed the free-concert goers, “We’re going to change things.” From there Hillary accused Donald Trump of fear mongering, scandalizing the Republic, and of committing unbridled offenses.

The problem for Hillary was that amid all the glamor, neon lights, and overall J-Lo-induced excitement, there was limited time for her to give specific examples as to how Trump “stokes fear, disgraces democracy and insults one group of Americans after another.”

In fact, those sorts of time constraints could also be why the former Secretary of State also forgot to explain why she left four Americans to die in Benghazi, erased 30+ thousand confidential emails, colluded with protestors to upset the democratic process, threatened to ruin the many women her husband raped, sexually assaulted, and abused, and made $153 million, via a pay-to-play scheme, by pretending money laundering was a charity organization.

According to Hillary, “if we turn out, we win!”

Hillary, when you say, “turn out,” does that also mean “turning out” dead people, illegals, and voting on the same Soros-provided machines that Venezuela employed when electing Hugo Chavez?

Either way, only Hillary Clinton, trying to be cool, could bring hyperbolic corniness to the unprecedented level she did when she hollered to the crowd in an uncomfortable decibel, “We just heard Jennifer perform ‘Let’s Get Loud,’ well I say let’s get loud at the voting booth.”

From there, Hillary cast her campaign advisor’s quiet voice instructions to the wind and inspired the Miami crowd to unparalleled heights by screeching out, “Don’t wait another day to vote and ‘let’s get loud’ by knocking on doors, making calls, take out your phones.”

Anyway, at the end of the concert, to protect Mrs. Clinton from having visually stimulated seizure, instead of shiny balloons, soggy ticker tape stuck to the the crowd.

Completely dwarfed next to a robust Hillary, the diminutive Anthony told concertgoers that even though he divorced J-Lo, and probably wouldn’t be caught dead in a room alone with Hil-C, “he would trust his life with,” either women – which, ends up being more than Christopher Stevens, Sean Smith, Tyrone Woods and Glen Doherty can say.