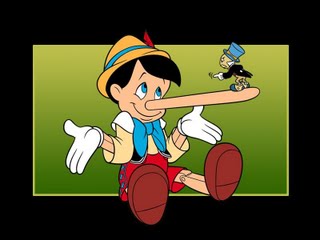 “If we suspect that a man is lying, we should pretend to believe him; for then he becomes bold and assured, lies more vigorously, and is unmasked” Arthur Schopenhauer.

Lying is a trademark characteristic of narcissism and is done in an attempt to manipulate and maintain control.  The President of the United States appears to be a narcissistic, pathological liar. Obama “…changes stories frequently, can’t keep a record of stories he’s fabricated, lies in situations he finds easy to do so and goes on the defensive whenever cross-examined, threatened or questioned.”

The publics’ rejection of the health care proposal seems to have pushed some of Obama’s pathological buttons.   He stretches truth and presents falsities in order to maintain control, get his way by any means necessary, and manipulate both proponents and opponents alike. Obama continually attempts to put the public at ease by promoting false statements and misrepresentations of truth.

While Congressmen and Senators defending nationalized health care meet with hostile resistance at town halls Obama is greeted with the opposite and yet he is compelled to lie.  He is welcomed everywhere by a carefully controlled and contrived audience grappling to believe every phony word falling from his lying lips in the same way a naïve girl clings to professions of love from a libidinous high school Lothario.

Preaching to the choir, Obama descended on Portsmouth, New Hampshire, chastising health care opposition by setting Americans straight on the true definition of “truly scary.” His goal was to change minds on every terrifying truth contained within the 1018 pages of HR 3200.  He stressed public anxiety, based on what he defined as unfounded misinformation advising Americans unilaterally reject concern…just because he said to.   Obama being persuaded does not indicate truth at hand because those who lie pathologically excel at believing self-concocted gobbledygook.

Barack Obama makes broad, sweeping proclamations; coupled together with rhetorical skill his bogus assertions carry impact for the non-astute. At the New Hampshire town hall Obama attempted to assuage senior’s fears through the promotion of deception.  For the President, adherence to accuracy has never been a top priority.  Anxious to sway the nation to trust in his plan and acutely aware the elderly are key constituents Obama said, “We have the AARP on board because they know this is a good deal for our seniors,” misrepresenting the senior organization.  The AARP stated it does not support a plan that includes cutting Medicare benefits to the elderly, which this one does.

Dithering around the issue of Medicare, Obama appeals to the over 65-voter base.  At the Portsmouth town hall, he said; “…another myth…is this notion that somehow we’re going to be cutting Medicare benefits.  We are not.”  Pathological liars are notorious for inability to manage and keep track of past declarations.

“We are spending a lot of money subsidizing the insurance companies around something called Medicare Advantage…And if we eliminate that and other programs, we can potentially save $200 billion out of the health care system that we’re currently spending…”

Obama’s fidelity to former statements neither exists nor hinders his ability to present Americans with fictitious claims because pathological liars, when presented with their own statements, typically disregard evidence and stick to the story.  In response to opposition to a single-payer system, Obama told town hall attendees. “I have not said I was a single-payer supporter…so I’m not promoting a single payer plan,” which in the past he repeatedly stated he does support on numerous occasions.

Knowing millions of Americans want to retain private health insurance, Barack Obama said that “Under our proposal, the majority of Americans will still be getting their health care from private insurers.”  With his busy town hall schedule the President obviously failed to read page 16 of HR3200, which specifically addresses limitations on new enrollment and changes in terms and conditions. His statements exhibit purposeful disingenuousness by failing to mention criteria, which outlines how over time, millions of Americans will be forced to take the public option against their will.

Probably the most audacious proclamation to come from the President at the New Hampshire town hall was, “… you can have the same deal that members of Congress have, which is they can look at a menu of options — and you will be able to select the one that suits your family best.”  This type of blatantly deceptive statement unfairly leads hearers to believe that Americans will be afforded the same limousine policy for health, dental, vision, life, flexible spending and long term care insurance that presently benefits the US Congress.  This statement is flagrantly misleading and Obama knows it.

The health care menu proposed for Americans is local Chinese takeout and Congresses menu is from Aragawa.  Because both plans offer carte du jour Obama deceitfully passes them off as one and the same. Democrats in Congress overwhelmingly reject adopting a proposed amendment put forth by physician and Senator Tom Colburn of Oklahoma. “Democrats in the House and Senate have generally voted against proposals to make the public plan mandatory for members of Congress,” indicating the plan is nowhere near the same in quality or echelon.

It is incumbent upon Americans to ponder Obama’s words when he says, “You will not be waiting in any lines.”  If Obama states the truth, why does he insist on relegating everyone to the post office after candidly admitting, “It’s the Post Office that’s always having problems?”

Town hall after town hall Barack Obama will likely carry on in typical egotistic pathological manner varying stories, forgetting past statements, lying and reacting with enmity when questioned or challenged.  In like manner, Americans will continue keeping close documentation of the discrepancies in Obama’s words.  We, as free people, will do so in an effort to remind one another of the difference between truth, lies and the dictatorial deceit threatening the foundation of American democracy.