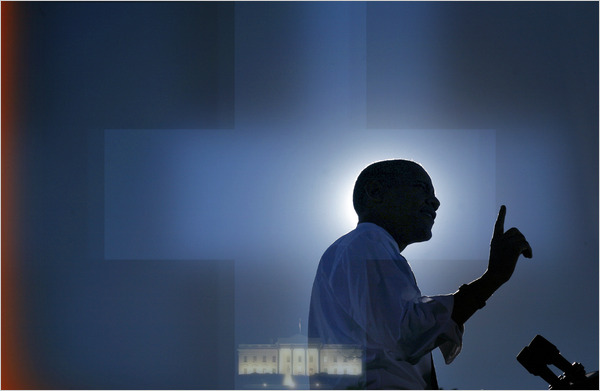 The secularists at the New York Times must have had a corporate conversion based on the color picture of Barack Obama superimposed over an illuminated cross accompanying an article on health care reform.  Over the years, the left wing newspaper religiously preached separation of church and state.  However, that was only until Obama’s presidency provided a sacred creed worth the evangelistic support of journalism.

The New York Times‘ sanctimonious reporters and editorialists loudly declaim the mixture of religion and politics whenever conservative Christians are involved. But when the religious Left brings Democratic partisans to preach to the choir, the church/state separatists in the media are quieter than country church mice.

Thus with the health care vote on the horizon and Obama in a position to roll the stone away from a policy that would otherwise be dead,  suddenly the New York Times embraced pious conviction.  Apparently, the Grey Lady considers the President’s virtuous statement, “…the issue should be what’s right, not the politics,” befitting of elevation to the seat of godhead.

The New York Times article As Health Vote Awaits, Future of a Presidency Waits, Too was accompanied by a photograph of a backlit cross, over which the shadow of Obama is enveloped in a halo of light in the shape of a holy rood.  Obama’s raised index finger reminiscent of Jesus instructing the masses at the Sermon on the Mount-master teacher, pantocrator Obama educates America about the righteousness of social vision.   The only missing component is an audio link to Handel’s Hallelujah Chorus.

The content of the article is a Lenten subliminal tour de force.  The article includes messianic Obama apostles like David Axelrod, laughing off scoffers and reassuring faithful disciples, the Democrats “believe we will have the votes” to pass health care reform.

As dawn approaches, the god-man reclines at table with Democrat Judas’ mulling political options. The NYT states the plan’s fate could depend on how “a couple dozen Democratic congressmen” answer the question: “Would passing health care devastate Democratic chances in the fall? Would rejecting it devastate a Democratic presidency?”  Translation: Will Obama be betrayed for 30 pieces of silver and before the cock crows three times, be denied and handed over to health care crucifixion?

In a Good Friday prediction Karl Rove foresees, “If they pass it, they’re dead in the polls.” Christ like and capable of resurrection from the dead, the faithful line the road to political Golgotha believing if health care, “fails this week, Mr. Obama could still recover.” Three days in a grave for Barack is a non issue.  Why?  Because according to the New York Times, the president “has the benefit of time and residual personal popularity,” which holds the promise of paschal revival.

The blasphemous photo of Obama places the New York Times in a position of hypocritically contradicting its own secular standard that politics should remain separate from religion.  As Onward G.O.P. Soldiers expressed, aren’t New York Times readers “entitled to a little sanctuary” from one-sided religious imagery falsely presented as unbiased journalism?

Based on what the Grey Lady incessantly expresses about separation of church and state on her opinion page, even the New York Times would be hard pressed to disagree a picture of Obama superimposed over a cross shaped corona “disrespects religion as much as [it does] democratic ideals.”