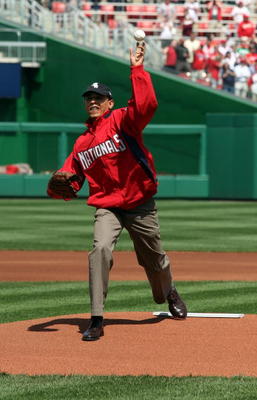 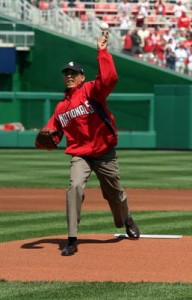 Fresh from the inspiring White House 2010 Easter Egg Roll, where President Obama did his secular best to inspire children on the true meaning of Easter.  The teleprompter president showcased his skill by reading Dr. Seuss’s, Green Eggs and Ham.

It was there that President Obama told the children the “moral of the story was to never be afraid to try new things.” In all probability it wasn’t green eggs, or ham Obama was talking about, but probably pressuring Mom and Dad to buy an electric car to save the environment.

Obama, in a spiffy red Nationals jacket paired with inappropriate, shiny brown wing tips, took a break from rolling eggs. Gassing up the Cadillac limo Barry segued over to the Washington National’s opening game to participate in the 100-year old tradition of throwing out the first ball.

Back at the White House “Let’s Move” Easter celebration Obama was treated to adoration from a gaggle of giggling children.  At National Park the crowd, Obama tries “new things” on was larger and rougher.  The arena attendees “cheered a bit, but boos were clearly audible across the stadium.”

After “Obama took to the mound [he] made a costly error. He whipped from his glove a folded Chicago White Sox cap, shook it open and put the traitorous garment on his head. This time the boos came from Nat’s fans, too.” Playing both sides of the aisle, and reaching out to Independents, Obama injected post-partisanship into baseball. Obama donned the White Sox cap, which was met by “even louder boos” from the crowd. Pleased with the level of agitation the action stirred up Obama, in true Chicago style, kept the cap on.

Obama preened and then, “completed his delivery, using the familiar motion some commentators in the past derided as a girl toss.” Mimicking Obama’s endless highfalutin rhetoric, “the ball floated, slowly and with great loft, in the general direction of home plate,” but like Barry’s politics ended up being, “wild and far to the left.

Oblivious to the less than stellar performance, Obama reacted in the same way he does when responding to his diminishing standing in the polls.  Showered from all around with resounding boos, Barack “didn’t much mind. He stood atop the mound, waved to the cheering crowd and then strode off, doffing his cap.”

Of his pitch, Mr. Obama said afterwards: “I was a little disappointed with the pitch. It was high and outside,” sort of like the President, high-minded and outside the centrist mainstream. Then Obama did what he does best, which is to make excuses for shoddy performance by insisting, “I was intentionally walking the guy.”

Reminiscent of his Harry Smith interview, where Obama bragged that “Its like health care, I always come from behind – I finish strong.”  Obama excused his weak, girly toss by insisting, “If I had a whole inning, I’m telling you, I would have cleaned up.” It sounds like Obama was in campaign practice mode suggesting accuracy improves if given a “longer outing.”

Some advice for Barack Obama — stick to playing basketball because “had a runner been on base, the umpire may well have called a balk.”  So far, Mr. President it’s obvious to America you run the nation like you throw a baseball – poorly.