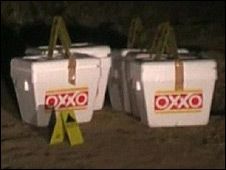 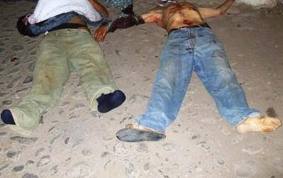 In fact, in the Pacific coast resort of Acapulco, “on a street outside a shopping center,” 15 male corpses, 14 of them headless, were recently discovered. “The victims, all of whom appeared to be in their 20s, were discovered in an area not frequented by tourists. Handwritten signs left with the bodies were signed by ‘El Chapo’s People’-a reference to the Sinaloa cartel.” After “seven of the victims had been identified… two of them were 17-year-old males.”

More than 1700 years post-Mayan Mexico, heads are once again piling up, and with each passing year the mound is growing bloodier, wider and higher.  In fact, “at least 30,196 people have died in drug-related violence since President Felipe Calderon launched an offensive against cartels in late 2006.”

Rival drug gangs have given up dipping enemies in acid and instead utilize beheading as a tool of intimidation when desirous of exhibiting a “grisly show of force.” A half-dozen blood-spattered heads lined up on the hood of a car, eyes open, mouths agape, is strong motivation for gangs to rethink trespassing on drug routes or intruding on another gang’s turf, which was the accusation the narco-message accompanying the headless bodies indicated was the 14 victims’ offense.

Fifteen dead bodies, 14 of them without heads, “was the largest single group of decapitation victims found in Mexico in recent years.”  In 2008,  heads were severed from 186 bodies out of 5,600 murder victims, and “12 decapitated bodies were piled outside the Yucatan state capital of Merida…[and]…headless men were discovered in the Guerrero state capital of Chilpancingo.”

In another spectacular incident, drug lord Moreno Gonzalez, killed in a late 2010 shootout and referred to as “the craziest one,” rolled heads onto a disco dance floor accompanied by a note that said: “La Familia doesn’t kill for money, doesn’t kill women, [and] doesn’t kill innocents. Only those who deserve to die will die.”

Moreno’s death has not quelled the drug war much less helped Mexican gang members keep their heads. Now even Acapulco has become a battle zone, a “site of fierce battles between drug gangs… with 27 people killed” in two days, and “two police officers, six people” shot and “stuffed in a taxi” and four others sprinkled about the city.

The largest groups losing their heads are gang members, followed close behind by mayors, law enforcement and Mexican military, who are all targets of decapitation.   Hit men cut off Mexican police Chief Martin Castro’s head and left it in an ice cooler in front of a station.  “The police commander was abducted … along with five other police officers and a civilian, only five days after starting his job.”

Experts suggest that the drug gangs have several motives… they seek to use beheadings to cow the citizenry from squealing on them and to pressure local authorities to collaborate… the gangs try to out-macho each other with greater acts of macabre violence, frightening rivals in a murderous spiral.

And so Mexico is awash in bloody headless bodies because it appears that south of the border it is getting harder and harder to keep your head, and maintaining your cool oftentimes means occupying an ice chest from the neck up.