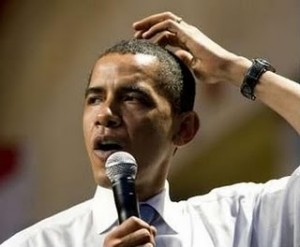 President Obama is scheduled to appear at Northern Michigan University to discuss WiMax high-speed wireless data networks. The highly anticipated visit has been advertised as: Open to the public by invitation only.

Maybe whitehouse.gov or the university staff could clarify for the less intelligent amongst us how an event can be open to the public, but by invitation only.  Does public/by invitation only mean that when the public arrives, they receive an invitation at the door?

Is the Obama event open to the whole community, but only by written or spoken request?  Is the entire Upper Peninsula community of Michigan welcome to freely attend the public Obama WiMax promotional tour, but only if invited,

Advertising a function as “Open to the public by invitation only” is like getting behind an Islamic state in the name of democracy and freedom, or seeking to spend billions to create a wireless network, expecting to be granted a kill switch to shut the Internet off.

But then again, most liberals do manage to rationalize:  Extending unemployment insurance to create jobs; celebrating free speech in Egypt while condemning the Tea Party movement and pushing the Fairness Doctrine here at home; calling for a spending freeze and then proposing $53 billion in new expenditures; and seeking to provide health care for children while opposing a ban on abortion.

Oddly, after two years of twisting common sense and logic, the baffling announcement of being “Open to the public by invitation only” should no longer be surprising.

In fact, this is the sort of confusion that got gate-crashers Tareq and Michaele Salahi in trouble in 2009 when the couple allegedly “crashed” the White House state dinner honoring Indian Prime Minister Manmohan Singh.  The duo could have just mistakenly thought the event was a friendly gathering open to the public only to learn, amidst much controversy, the function was by invitation only.

Two years later, for those who require a clearer explanation prior to any event, it’s likely that the White House, in an attempt to prevent embarrassing security breaches, has incorporated easy-to-understand advertising techniques to circumvent confusion. Therefore, in Michigan, to avoid the problem of uninvited guests thinking they are free to attend a “public” event, the rules are being clearly delineated beforehand:  Everyone is welcome, but by invitation only.

So as unemployed Michiganders anxious to hear Barack Obama discuss creating jobs by “connecting every part of America to the digital age” clamor their way to the university’s public function at the Superior Dome sports facility, disappointment awaits those who still don’t quite understand that, no matter the topic, whatever Barack says, he means the exact opposite.