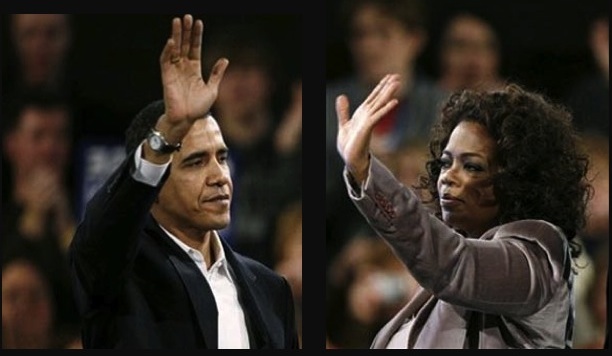 The woman was so overtaken with INVESCO Field-Obama-acceptance-speech emotion she cried her false eyelashes off. Oprah Winfrey, Barack’s most famous advocate, said Obama’s words were both “transcendent” and “transformational.” During the campaign, the second biggest “O” prayed in the “deepest part” of her “being that America [would] rise to [the] moment” and elect the biggest “O.”

Television tycoon Oprah Gail Winfrey conquered poverty and a “troubled youth” to become the most influential woman in media. She is an Oscar-nominated actress, author, humanitarian, and billionaire, as well as a one-woman charitable organization and Life Time Achievement Emmy winner. Yet despite all of her personal accomplishments, on the night of candidate Obama’s nomination speech, Winfrey confessed: “Obama’s presidential race and quick rise in the Democratic Party was the most powerful thing [she’d] ever experienced.” which doesn’t say much for Stedman, best friend Gayle, or the casts of the Color Purple and Beloved.

In fact, after Obama was elected, Oprah hosted a post-election special wearing a “Hope Won” T-shirt and wildly waving an American flag, holding up a newspaper with Barry’s picture on the front page while rowdily chanting “Mr. President!” Winfrey whooped it up and told her audience that if Obama lost, “Trust me… we’d be doing the show today from Northwestern Hospital with a drip.”

Oprah remains popular.  However, since endorsing Obama her high regard and huge viewership has steadily eroded. The Queen of Daytime TV’s foray onto the political stump has cost her a ton of fans. In light of Obama’s present standing in the polls, Oprah may be able to remediate the situation with a new T-shirt that says: “Hope Won, but please don’t hold it against me.”

According to Pew Research, Obama is “struggling with white voters.” More surprising is his “approval ratings among black voters plummet[ing] … to their lowest levels ever.” Gallup also found that “support [for Obama] among Hispanics took a tumble in the same period.”

At the same time as Obama’s quick descent from his lofty perch of glory, Oprah is branching out to “her own cable channel called OWN” and a source said she has been “struggling to find an audience,” and “fighting every day” to get viewers to tune in.

Therefore, after Barack announced his 2012 reelection campaign, Oprah decided it may be in her OWN best interest to avoid recreating her hysterical 2008 Tom Cruise-jumping-on-the-couch, Barack-Obama-for-President moment.

Which means for Oprah’s May 25th final show, a disappointed audience may not find a 2O12bama license plate frame in the complimentary gift bag.

Wasn’t it just yesterday that Oprah swooned in full-fledged Obama ecstasy?  Well this time around, growing a new audience for her joint venture with Discovery Communications must take precedence over wearing a “Yes we can” sombrero on air in honor of an increasingly out-of-favor president, because while it’s certain Winfrey will support Obama again, she’s decided to do so in an undisclosed location.

A source explained: “Helping a friend keep the most important job in the world is great,” but ensuring that her network endeavor “thrives is now [Oprah’s] priority.” The current “shift of consciousness” Ms. Winfrey now strives for and the “most powerful thing” the $2.7 billion dollar media mogul looks forward to experiencing includes growing a cable channel, keeping her false eyelashes firmly in place and preventing Barack Obama from single-handedly making her Oprah Winfrey Network venture the first thing she attempts that doesn’t succeed.