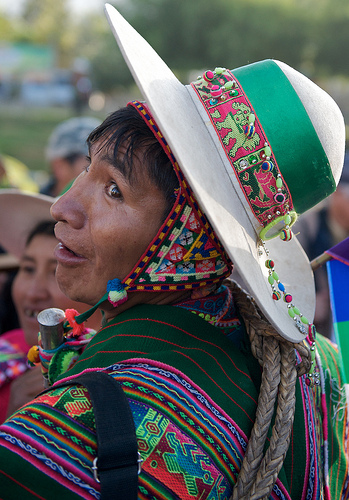 The nation of Bolivia “just passed a domestic law that does the same for bugs, trees and all other natural things” in the central South American country that it does for living breathing people.  It seems the Andean country is standing for planetary parenthood and has plans to draft a “United Nations treaty giving ‘Mother Earth’ the same rights as humans.”

Reflecting indigenous traditional beliefs, the proposed global treaty says humans have caused ‘severe destruction…that is offensive to the many faiths, wisdom traditions and indigenous cultures for whom Mother Earth is sacred,’

It also says that ‘Mother Earth has the right to exist, to persist and to continue the vital cycles, structures, functions and processes that sustain all human beings.’

Alpacas, chinchillas, bunchgrass, Amazon River anacondas, and most especially erythroxylon coca plants are rejoicing as Bolivia takes the lead in giving the earth dominion over men, instead of how it was originally planned when God made man dominant over creation. “In indigenous Andean culture, the Earth deity known as Pachamama is the centre of all life, and humans are considered equal to all other entities.”

Was God mistaken when He said, “Let us make man in our image, in our likeness, and let them rule over the fish of the sea and the birds of the air, over the livestock, over all the earth, and over all creatures that move along the ground?”

The Creator must have been, because Bolivia is hoping to urge the UN to “recognize the Earth as a living entity” that humans have sought to “dominate and exploit” to the point that the “well-being and existence of many beings” is now threatened.  Does preserving the ‘well-being and existence of many beings’ mean that if a Bolivian swats a malaria-infected mosquito, in lieu of a parasitic infection, it could lead to jail time in San Pedro Prison?

Remember Aymara Indian Evo Morales? He’s the trumpet-playing “indigenous leader” of the poorest nation in South America.  President Morales was one of two people who demanded President Barry box up the Nobel Prize and ship it back to Oslo. The one without the bowler hat was Russian Liberal Party leader Vladimir Zhirinovsky.

Anyway, on behalf of Pachamama, good son Evo Morales distributed a pamphlet at the UN which listed Bolivia’s “10 ‘commandments’… to ‘save the planet’— beginning with the need ‘to end capitalism.’” It’s no surprise that Bolivia’s economy ranks ahead of Haiti’s as “one of the poorest in the Americas.” Seems Evo is “an avowed socialist, his political ideology combines standard left-wing ideas with an emphasis on traditional Andean values and social organization,” neither of which bode well for Bolivia’s economic future.

Even so, the treaty’s wording is still “evolving,” which is not only apropos, but also downright Darwinian.   In the end, the Pachamama Pact’s “general structure is meant to mirror Bolivia’s Law of the Rights of Mother Earth, which President Evo Morales enacted.”

The ‘Mother Earth’ document speaks of the country’s natural resources as “blessings,” and grants the Earth a series of specific rights that include “right to life” – which gives new meaning to ‘Keep off the grass’ – as well as the  right to “water and clean air; the right to repair livelihoods affected by human activities; and the right to be free from pollution.”

One good thing – while 60% of the Bolivian population live below the poverty level, the Gaia agreement will establish “a Ministry of Mother Earth, and provide the planet with an ombudsman whose job is to hear nature’s complaints as voiced by activist and other groups, including the state.” That means at least one job will be created for a Bolivian version of Dr. Dolittle.

Bolivia’s Ambassador to the UN, Pablo Solón Romero, expressed the following earth-loving opinion: “If you want to have balance, and you think that the only [entities] who have rights are humans or companies, then how can you reach balance? But if you recognize that nature too has rights, and [if you provide] legal forms to protect and preserve those rights, then you can achieve balance.”

Before Solón goes dragging polluters and slug-salters into court, someone should inform him that plastic, automobiles, and insecticide are some of Bolivia’s biggest imports.

Another dilemma also arises as Evo and Pablo rant on about plants rights, pollution and saving the planet, because to make ends meet:

The coca plant, the source for the illegal drug cocaine, [is] the cash crop of the country bringing millions of dollars to the informal sector of the economy…The production of coca in the countryside has become almost unstoppable, where hundreds of hectares of forest are being cut yearly for the cultivation of the plant. Also, millions of toxic chemicals are being dumped into rivers and lands as a result of the increasing use of pesticides and manufacturing of cocaine.

In an effort to balance the debate, Solón explained “We’re not saying, for example, you cannot eat meat because you know you are going to go against the rights of a cow,” which is a steak rider, so to speak. “But when human activity develops at a certain scale” that you cause a species like stink bugs to disappear, “you are really altering the vital cycles of nature or of Mother Earth. Of course, you need a mine to extract iron or zinc, but there are limits.”

The UN was set to began the Morales-initiated debate prior to International Mother Earth Day. Global environmentalist/activist Maude Barlow, who hails from Canada, supports Evo’s Bolivian treaty, and planned to launch a book during the UN debate called Nature Has Rights, which is not to be confused with the as-yet-unpublished UN work Fetuses Do Not Have Rights.

In the future, an impoverished Bolivia hopes a UN sponsored Terra Mater treaty will usher in equal rights for the Rio Itenez Rice Rat, Bolivian Mountain Coconut, and 40 year-old pet rocks.  As a result, the hope is that lesser beings will find their place at the breast of a “Mother Earth” who, at least in Bolivia, appears to be cocaine-addicted and sporting a white powdered nose.

With that in mind, and based on Bolivia’s indigenous President Morales’ skewed sense of priorities, maybe he would better serve the planet if from now on, instead of lobbying on behalf of Mother Earth, he just concentrated on keeping track of disingenuous Nobel Peace Prize winners.