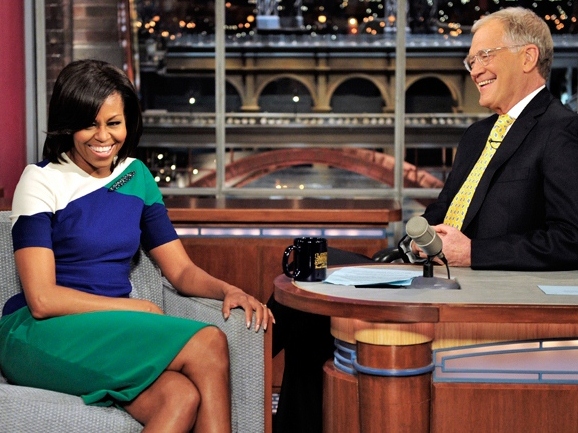 Not until it was almost certain that Barack Obama would become the 44th President of the United States was Michelle LaVaughn Robinson Obama proud to be an American.

However, listening to her now, it’s quite clear that she’s always been proud to call the south side of Chicago home.

Recently, while making the talk show rounds, The First Lady appeared on “The Late Show with David Letterman.” Besides family dinnertime discussions about macroeconomics, Obama told Letterman that both she and President Obama work hard to “instill the values of south Chicago in their daughters.

If given the choice, the President and First Lady prefer to identify with the culture of a “toddlin’ town” that, besides Al Capone and deep-dish pizza, also introduced America to aging bomb-throwing domestic terrorists, racist/anti-Semitic reverends, a deeper understanding of community organizing, and a president who, above all, does Saul Alinsky proud.

According to Michelle, for the Obamas, Chicago is all about the values – so much so that when the family steps off the elevator, the second- and third-floor family residence of the White House magically transforms into the Windy City.

Michelle told a fawning Letterman that “what we want to have happen is when they get off that elevator and walk in to our residence that it feels like the south side of Chicago, the same values, the same rules, the same sense of responsibility.”

If the first lady favors ideals unique to south Chicago over traditional American values, then why were the couple’s children, Sasha and Malia, skiing with Mom in Aspen in February when Chicago law enforcement logged in a whopping 18 homicides for that month alone?

The fact that Mrs. Obama failed to address Letterman’s previous disrespectful, sexually perverted remarks about Piper Palin, who was Malia’s age at the time those comments were made, may mean that on Chicago’s south side, if it’s a conservative being attacked, it’s perfectly acceptable for “kindness, empathy and respect” to be excluded from the conversation.

A relaxed Michelle expounded on the idyllic values residing in the old neighborhood as compared to the tedious perks the Obamas presently endure as they struggle to survive in the lap of luxury.

Relating directly to the plight of the common folk, Michelle reminded America that back in Chicago, even though they lived in Hyde Park in a mansion valued to be worth $3 million and Sam Kass was their personal chef, the Obamas “didn’t have [butlers], you know. So, Barack and I really do work hard to, you know, figure out how you create those values in this other world that we know nothing about.”

All right now, hold it right there. America has been handed a lot of poppycock for three years, but are we now supposed to, you know, believe that haute couture-wearing, $4 million Christmas-vacationing Michelle Obama is trying to, you know, create a south side of Chicago atmosphere on the second and third floor of the White House and is doing it by making sure that Sasha and Malia, when they’re not, you know, vacationing in Spain or Mexico, “have chores to do?”

And is America also supposed to believe that nouveau riche Michelle and her husband are, you know, living in a strange world that, you know, they know nothing about?

Guess so, because she told Letterman that Chicago values are a must for Sasha and Malia, and that these are the “things that we can give them … that [are] more important than anything that they’ll have.”

Then, quite by accident, the First Lady shed light on the source of the President’s ideological approach to governing. While discussing her daughters, Mrs. Obama actually admitted to Letterman that, just like they’ve done to America for the last three years, if Sasha and Malia refuse to obey them, Michelle and Barack just say “Give me that” and “take their stuff away.”