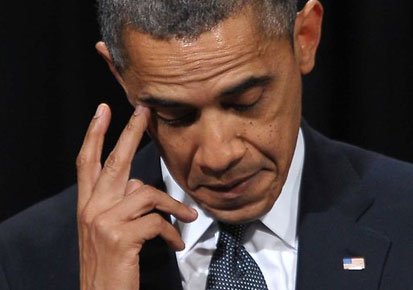 Something happened between the time the president talked about Christina Taylor Green, the 9-year-old girl shot dead in the Tucson Gabrielle Giffords shooting, jumping through rain puddles in heaven, and the country finding out that Sara Murnaghan, a 10-year-old Pennsylvania child with cystic fibrosis, is being denied a life-saving lung because of government regulations dictating age restrictions on organ transplants.

Sara Murnaghan does qualify for pediatric lungs.  However, there are currently none available.  Without transplanting adult lungs into Murnaghan’s body, the little girl has about five weeks to live and will qualify for a transplant one year and eleven months too late.

Lately, America has been subjected to radically pro-choice Barack attempting to advance an anti-gun agenda by pretending to care about saving the lives of children he’d have otherwise been fine with aborting had they still been in utero.

Undermining Second-Amendment rights is why the president shows up at memorials, fake-cries on camera, hugs grieving parents, signs legislation surrounded by high-fiving youngsters, and repeatedly vows that saving the life of one child is worth the effort.

Piling it on, Michelle Obama even flew to Chicago to attend the funeral of 15-year-old gun violence victim Hadiya Pendleton and then invited the dead girl’s parents, Cleo and Nathaniel, to grace the State of the Union skybox, just to add a good dose of parental bereavement to the anti-gun atmosphere.

Now, after hearing Kathleen Sebelius make the cold comment that “someone lives and someone dies” in response to questions about why she refuses to intervene in the Sara Murnaghan emergency lung transplant case, it’s clear that anti-gun political pragmatism is at the root of concern over the saving of some lives and not others.

It’s clear that in the Obama administration, if gun violence kills a child, it matters.  However, if cystic fibrosis is the killer, oh well — as Kathleen Sebelius says, “someone lives and someone dies.”

In response to the Sandy Hook shooting where 20 children and six adults lost their lives in Newtown, Connecticut, the president stressed that “if there is a step we can take that will save even one child from what happened in Newtown, we should take that step.”

Yet, during a recent House hearing, when Lou Barletta (R-Pa) implored HHS Secretary Sebelius to “take that step” so that a little girl can have a shot at life, and to “please, suspend the [lung transplant] rules until we look at this policy,” Sebelius, who does have the authority to waive the rule on Sara’s behalf, refused.

At the Tucson Memorial, Scripture-quoting Barack Obama said, “If this tragedy prompts reflection and debate, as it should, let’s make sure it’s worthy of those we have lost. Let’s make sure it’s not on the usual plane of politics and point scoring and pettiness that drifts away with the next news cycle.”

At the Newtown Vigil, Obama reaffirmed those sentiments when he said that “[t]his job of keeping our children safe…is something we can only do together … we bear a responsibility for every child because we’re counting on everybody else to help look after ours; that we’re all parents; that they’re all our children.”

Then, while signing executive orders aimed at curbing gun violence, flanked by four anti-gun youngsters, Obama said, “This is our first task as a society. Keeping our children safe. This is how we will be judged. And their voices should compel us to change.”

So if saving children’s lives are “not on the usual plane of politics” when an opportunity to fulfill “our first task — caring for our children,” arises for one little girl, why does Kathleen Sebelius respond by coldly reminding Congressman Barletta that although it’s an “incredibly agonizing situation where someone lives and someone dies … 40 [other] people in Pennsylvania are on the ‘highest acuity list’ for lung transplants”?

And while caution is in order because the government changing the rules for the benefit of the one sets a dangerous precedent — in the future, the government could be inclined to change the rules to detriment of the many — there is a huge amount of liberal hypocrisy afoot here.

Why?  Because in the end, little Sara Murnaghan will likely die, and not as the result of a gunshot wound, so Barack Obama won’t care.  Moreover, Michelle Obama will not attend Sara’s funeral, and neither will Sara’s mom and dad, Janet and Fran, be sitting beside the first lady next year in the State of the Union skybox as representatives of the need to change organ transplant laws.

Rest assured, in the short time that Sara has left, Barack Obama will not be reminding America that “we bear a responsibility” for Sara.  Nor will he sign a middle-of-the-night executive order overriding Kathleen Sebelius’s stubborn refusal to waive the adult lung transplant rule in time to save the child’s life.

It’s also unlikely that health care reformer Barack “Doesn’t Care” Obama will be on hand to shed one fake tear or quote a single out-of-context Scripture passage at Sara’s funeral.

Instead, as a result of refusing to “take that step … [to] save even one child,” Barack Obama and his self-serving administration have exposed the true nature of an agenda that has nothing to do with shielding the lives of helpless children from harm and everything to do with advancing a progressive anti-gun agenda.