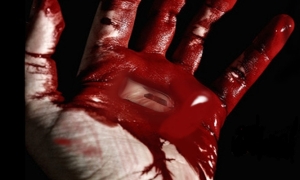 Barack Obama’s hands are covered with quite a bit of blood. Actually, as harsh as it may seem to say, Americans are swimming in oceans of blood thanks to this president, and although he hasn’t been, he should be held fully accountable.

Time and again Obama has proven that when it comes to gun control, child safety arguments are powerful tools to assist him in his mission to dismantle the Second Amendment. However, bloodbaths are not nearly as disturbing to the president if guts and gore assist him in the advancement of the left-wing agenda.

That theory is confirmed by Obama’s lack of outrage, or even interest for that matter, in the deaths resulting from initiatives such as “Fast and Furious,” where his administration purposely put weapons in the hands of drug cartels. Obama’s failed gun-walking scandal resulted in the blood of Border Agent Brian Terry and ICE Agent Jaime Zapata being spilled, as well as hundreds of innocent Mexican citizens whose deaths can be tied directly to the U.S. government, which means the blood flows directly to the Oval Office and is the reason Barack Obama’s hands are stained ruby red.

Speaking of bloodletting, it’s common knowledge that Obama is a committed supporter of abortion, is enthusiastic about destroying partially-born infants, and is an unabashed fan of leaving babies born alive in botched abortions to die in hospital laundry rooms.

Those types of radical pro-choice beliefs are the reasons why the president also has the stagnant blood of unborn babies on his hands.

Barack Obama’s rationalization for such barbarism centers on his claim that he doesn’t want to undermine the original intent of an abortion, the primary goal of which is to have the procedure result in a dead baby. Therefore, if a baby is born alive, denying warmth, oxygen and hydration ensures the original intent is fulfilled.

As for the unfettered slaughter of 3,000-4,000 babies a day, the president, who is known to view the U.S. Constitution as a “flawed document”, would likely argue that despite the carnage, at least in this case, Roe v. Wade is settled law.

Then there’s Benghazi; Hillary Clinton’s outburst of “what difference does it make” exposes the indifference those liable for the murders of four Americans have toward the blood that spilt in Libya on September 11th, 2012. Why? Because if the details surrounding the loss of life were exposed in their entirety, the truth that would be revealed would undercut Obama’s real Middle East agenda and possibly put a damper on Hillary Clinton’s presidential aspirations.

That sort of indifference is deadly coming from an administration that refers to terrorist attacks that result in the death of thirteen troops as “workplace violence.”

Then there’s illegal immigration, which is causing Americans to die from imported viruses and resulting in Americans being killed or maimed by violent illegals who freely roam our nation’s streets with Barack Obama’s implicit approval.

Look around. The tide is rising higher each day. To avoid getting his pant cuffs stained with the blood he’s responsible for spilling, Barack Obama may have to shorten his pant legs by pulling his Mom jeans up tightly under his armpits.

Mom jeans and bloody hemorrhagic viruses aside, thus far, there is no argument that Enterovirus 68 is directly responsible for 796 Americans in 46 states being sickened. Some of Obama’s victims have suffered to the point of needing breathing tubes; some are paralyzed; and seven are now dead and buried. Absent from within the U.S. for 50 years, Enterovirus D68 originated in Latin America, and was delivered via minors who crossed the border accompanied only by a contagious virus that the U.S. government was well aware existed in Latin America since 2010.

So suffice it to say that despite the knowledge that unaccompanied minors could cause American children to fall ill, Barack Obama still encouraged the influx of illegal children and has plans to usher in thousands more who could be harboring a whole new breed of Third World diseases.

And, even more disturbingly, some of the blood on the president’s hands belongs to tiny infant Lancen Kendall, 4-year-old Eli Waller, 21-month-old Madeline Reid, and 10-year-old Emily Otrando, all of whom died from an Enterovirus they never should have been exposed to in the first place.

And all that bloodshed doesn’t even begin to broach what the release of hardened illegal criminals who are rapists, pedophiles, and murderers portends for America’s future.

In the coming months, Obama granting amnesty to 34 million illegals will not only make America unrecognizable, it will also contribute greatly to the deluge of blood to which we will all be subjected.

Scarier than diseases, murders, illegal criminals, open border permeation and much, much more are the “lone wolf” terrorists who, thanks to Obama, have crossed our border and could be wandering the highways and byways of America right now, looking for police and military to hatchet to death and unsuspecting grandmothers to behead in the name of Allah.

After all is said and done, there are many more examples of how, as a result of Obama’s diabolical quest to “fundamentally transform” the United States of America, innocent blood is being spilled.

That’s why, whether he recognizes his culpability or not, the river of blood currently drenching America flows directly toward the White House into both of Barack Obama’s hands.