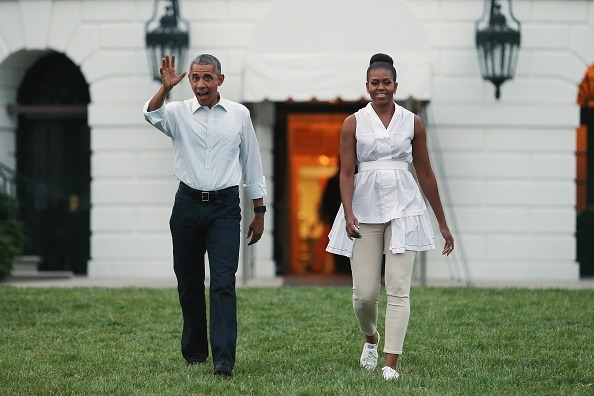 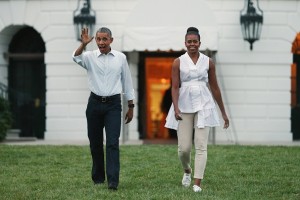 President Barack Obama must have felt that after doing a decent amount of damage to the country this week, he earned the right to leave early for his 17-day vacation in Martha’s Vineyard.  This year the president will be kicking back at the same $12-million Chilmark seven-bedroom, nine-bathroom estate that he and Michelle and their entourage rented last year.

Also accompanying him on the trip are younger daughter Sasha and wife Michelle and her donut-shaped hair bun, which, of late, she’s been balancing like a bird’s nest on the top of her head.

Lena is the writer/producer/star of the raunchy HBO series Girls.  In addition to dreaming up Girls, Malia’s summer supervisor, whose father Caroll does giant-sized paintings of giant-sized women with giant-sized genitals, also admitted to sexually molesting her younger sister Grace when they were kids.

So while Sasha is learning to boogie-board and taking leisurely hikes with Mom and Dad, 16-year-old Malia will be doing more important things like watching Lena Dunham roll around nude on the set of Girls, learning how to get a woman to crawl on all fours before participating in rough sex, and getting a close-up view of things like flesh-colored pasties and prosthetic penises.

As for the rest of the family, while Congress considers the shameful Iran deal, Dad Obama will be eating “Barack My World” ice cream at Mad Martha’s, donning a ridiculous-looking helmet to go biking, and, before tearing up the links, probably slip into those nerdy-looking khaki shorts and saddle shoes.

Also, while in between a few arm-twisting phone calls to Jewish congressman Chuck Schumer (D-NY), who is reportedly opposed to giving Iran nuclear bomb, Obama will undoubtedly join Sasha and Michelle and that huge bun of hers on outings to Oak Bluff for lobster rolls and fried clams at Nancy’s and delicacies like Fontina Ravioli at the upscale Sweet Life Café.

One potential highlight of the trip does include the prospect of Obama bumping into former secretary of state and presidential hopeful Hillary Clinton, who will also be visiting the tony enclave for the annual birthday soirée for Ann Jordan, wife of Democratic adviser Vernon Jordan.

Last year the Clintons and the Obamas all self-consciously bit their bottom lips as they robotically danced the night away at Ann Jordan’s 80th birthday.

Speaking of dancing, while the five American service men killed in a terrorist attack in Chattanooga were being buried, Obama was line-dancing in Kenya.  So, who better than the Lipala expert to set an example for the partiers by demonstrating how efficient he’s become at conveying a message of coldhearted indifference.

Hopefully, this year there won’t be another hurricane, flare-up of Middle East unrest, ISIS beheading of an American, or a black thug shot by a white police officer to distract Obama from hanging out in a vacation spot frequented by those he disparagingly calls “life’s lottery winners.”

Either way, 17 days from now, before returning home to Washington, D.C., a fully rested and energized Barack will have had enough time to have thought of a way to exempt himself from his phony crusade against income inequality.

After he figures out a way to relate to the little people, the president can busy himself with illegally overriding any and all opposition to the Iraq deal and negotiating another crushing federal budget.  Then, in September, he’ll welcome to the White House a provocative pope who shares his obsession with nonexistent climate change.

As if all that weren’t enough, the president also has plans to roll out the red carpet for Chinese President Xi Jinping, who, unlike Obama, rather than purge and emasculate the Chinese military, is plotting future world domination by promoting his top military generals.