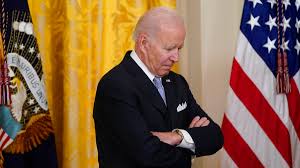 Hours after the shooting in the Texas border town of Uvalde, Obama’s front man, Blundering Biden, bungled his way up to the White House podium accompanied by full-time Visiting Angel Dr. Jill Biden.  Joe eulogized the 21 victims as “beautiful, innocent second-, third-, fourth- graders.”  Appearing morose, Gramps shared that he had hoped that as president he “would not have to do this again.”

Sincerest condolences aside, but be it Biden or Barry, it’s a bit disingenuous for ardent promoters of 3,000 abortions a day to publicly mourn the mass murder of defenseless children.  Nevertheless, in his public statement, Biden parroted the Obama standard post-shooting remarks by saying, “There’s a lot we don’t know yet, but there’s a lot we do know.”

Then, impersonating Barack’s “lullaby and bedtime story” Uvalde tweet, a relatable Joe waxed maudlin over parents never again being able to “cuddle” with or have deceased kids “jump in the bed.”

From there, Joe personalized his comments by alluding to his experience as a grieving parent but chose to skip over mentioning the effect a premature death of a sibling might have on a crack-addled/prostitute-seeking brother with an eye for his brother’s widow.

For “normal” people who cherish life at every stage, what happened in Texas is a nightmare.  That’s why manipulating the death of innocents — for political expediency — should be the last thing anyone does.  But it’s the left we’re talking about, and leftists will gladly exploit children to benefit any agenda.

So on behalf of the deceased, our pro-choice Catholic “palmist” president shared Psalm 34, verse 18, which reads, “The Lord is near to the brokenhearted and saves the crushed in spirit.”  Excluding those involving the crushed corpses of aborted babies, Joe explained that he and Jill often contextually assign that text to various sad scenarios.

Also fond of Psalms, coincidentally, on Twitter, Born Alive Barack wrote, “May God bless the memory of the victims, and in the words of Scripture, ‘heal the brokenhearted and bind up their wounds'” (Psalm 147:3).

Meanwhile, back at the White House, immediately following a request to pray for bereaved families, Joe proceeded to speak the Lord’s name with utmost hostility when directing his anger toward the gun lobby for a catastrophe it had nothing to do with.  Sound familiar?

It’s been 340 — 3,448 days — 10 years since I stood up at a high school in Connecticut — a grade school in Connecticut, where another gunman massacred 26 people, including 20 first-graders, at Sandy Hook Elementary School. Since then, there have been over 900 incidents of gunfire reported on school grounds.

Not that he’s counting, but Biden’s Sandy Hook equation tallies up to 10,344,000 babies aborted in the same time frame.  Both Barack and Biden should stop citing Sandy Hook!  Why?  Because many of the children killed at Uvalde were in utero when Sandy Hook took place, which means both men lament the death of children they would have lobbied to abort had it been ten years earlier.

Missing the decade-old opportunity to dispose of those they now mourn, what is exceedingly clear is that Obama coaches Joe Biden.  Obama’s input is evident, not only in Biden’s wordage, but also in the contradictory nature of bowing to an abortion lobby that believes that saving “innocent lives” with commonsense abortion law leads to illegal abortion while insisting that commonsense gun laws save “innocent lives” because stricter laws eradicate illegal firearms.

Bereft of critical thinking skills, Joe remains “sick and tired of it!”  So, like Obama’s Twitter tirade, Joe brought up school and grocery store shootings and emphatically stated, “We have to act.  And don’t tell me we can’t have an impact on this carnage.”

Excluding a reference to Hunter’s gun that went missing outside a Delaware grocery store, Biden chose instead to further drive home his disgust by revisiting his stellar career as both a senator and V.P. to “Barack America,” the president with 162 mass shootings on his administrative résumé.  In addition, Biden cited how he worked to “pass commonsense gun laws” but forgot to point out Obama’s walking of 2,000 guns over the border, or the band of illegal aliens Obama released onto American streets who went on to commit 121 murders.

Despite the excessive amount of crack cocaine his son managed to acquire illegally, Biden thinks it’s “just wrong … that an 18-year-old kid can walk into a gun store and buy two [legal] assault weapons.”  Biden asked, “What in God’s name do you need an assault weapon for except to kill someone?”  If intent to kill was Joe’s main concern, why did he look the other way when Obama delivered illegal AK-47s and AR-15s to violent Mexican drug cartels?

Righteously indignant, Biden, who’s spent half a century lining his and his family’s  pockets with dirty money, then accused gun manufacturers of spending two decades marketing “assault weapons” for profit, and stressed,  “For God’s sake, we have to have the courage to stand up to the industry.”

Sounding more and more like his covert speechwriter, Joe opined: “Here’s what else I know: most Americans support commonsense laws — commonsense gun laws.”

Sharing deep thoughts, Joe shared how he “just got off a plane from Asia,” where, rather than catnapping for 17 hours, he suddenly realized exactly what global citizen Obama realized long ago, which is that “these kinds of mass shootings never happen with the kind of frequency that they happen in America.”

“Why?” asked Joe.  “Why are we willing to live with this carnage?  Why do we keep letting this happen?  Where in God’s name is our backbone to have the courage to deal with it and stand up to the lobbies?”

Reminding voters that “it’s time to turn this pain into action” and to “do more,”  Joe issued an Obama-style campaign plea:

For every parent, for every citizen in this country, we have to make it clear to every elected official in this country: It’s time to act. It’s time — for those who obstruct or delay or block the commonsense gun laws, we need to let you know that we will not forget.

Isn’t it funny how, before every election, safety issues arise and become the left’s primary concern?  There are vaccines, proposals to curtail free speech to keep people safe, abortion — without restriction — to keep women safe, and now the need to downgrade Second Amendment rights to keep defenseless Americans safe from maniacs who, law or no law, find ways to commit mass murder with illegal firearms.

And so, whimsical bedtime references, recitation of psalms, the mention of schools and grocery stores, and the familiar proposition to “turn a plan into action” prove once again that during a shadowy third term, someone other than Obama’s “front man” is doing the talking.