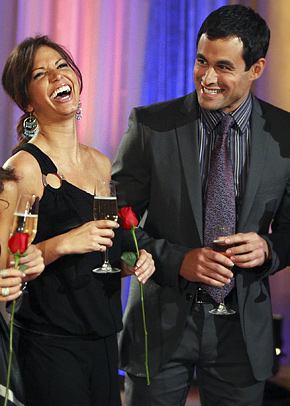 Watching reality TV is a guilty pleasure.  It can also be a cultural and political learning experience.  Take for instance, when Jason Mesnick was the lucky man on The Bachelor.  It was during that season that a star was born.  No, not the adorable little Ty Mesnick—it was the word “absolutely.”

On the show, former Dallas Cowboy cheerleader and Bachelorette Melissa Rycroft, incessantly used the word “absolutely.”  Jason would ask her, “Will you accept this rose?” Melissa would reply, “Absolutely.” Jason would grab her hand and ask, “Can I steal you?” Melissa’s response, “Absolutely!”

Yet, in the wider world, if you paid attention it was obvious that “absolutely” had become the new “totally.”   It was the word of the day making its way into the vernacular, replacing old favorites like “I hear ya,” “awesome,” and “dude!”  Everyone from the IT guy at work to the girl behind the deli counter became “absolutely” positive about everything from running a database to putting cream cheese on bagels.

Absolutely is such an emphatic statement that who can argue with it?  The word smacks of surety, self-confidence, assurance and control.  However, in a world where no one is sure whether the future holds nuclear annihilation or whether they’ll be handed a pink slip next week — absolutely, quite frankly, seems inappropriate and out of place.

One has to wonder how something so small and simple can become so pervasive that every question asked is answered with “absolutely.”  It’s a pandemic.   Absolutely has become an H1N1-style national vocabulary emergency where a vaccine is needed to get people to stop or at least stop it from spreading any further.

What is it that makes people mimic other people to the point where they become mindless androids? If it’s so easy to get millions to use a word just by saying it over and over again isn’t it also a simple task to manipulate minds to believe what is false?  That is how politicians work their way into the brain.  They say same thing over and over again until the public accepts a lie in place of the truth.

Take for example the last election where what started as innuendo morphed into full-blown brainwashing. Obama and his minions wormed their way into the America brain.  They “absolutely” used the repetitive method to get into the electorates head to the point that people are now convinced George W. Bush is dumb and Barack Obama is a genius. Indoctrination was in full display on websites like Kid’s IQ Test Center – who realized if you say something, even if you can’t prove it, there is the hope it will absolutely go viral and infect the culture.

Barack Obama’s estimated IQ score range is 130 to 148 and quite possibly higher. However, nowhere on the Internet can anyone locate Obama’s IQ score. His college transcript from Harvard is not available and I cannot locate his college GPA, his SAT score, or his LSAT score, or any other tangible evidence of his IQ score.

Barack Obama is a genius all right! During the election hope and change became buzzwords.  Obama managed to inspire a nation to the point of being absolutely convinced we needed something no one even understood – it was absolutely brilliant! Everyone stormed the cattle car clamoring to get onboard having no idea where they were headed or what to expect upon arrival.

And lets not forget the ever faithful left-wing media using repetition to catapult someone with absolutely no experience whatsoever into the highest office in the land.  Say, “Polly wants a cracker” long enough and before you know it…even Polly thinks she wants a cracker. Now America has elected someone so unqualified that his presence in the position of Commander-in-Chief is as out of place as the word “absolutely” is at the end of a sentence uttered from the newspaper boy when asked if he has change of a dollar.

Nevertheless, the President is smart enough to know the drill.  He has undertaken the herculean effort of mentioning himself thousands of times in speeches. In due time, every question formerly answered with “absolutely” will be henceforth answered with “Obama” whether applicable or not.

This monotonous method has proven so successful America has been transformed into a nation absolutely persuaded. Take for instance the claim that the stimulus worked and jobs were saved.   Pundits repeated the lie as the unemployment rate dropped to its lowest level in 40 years.  Did the stimulus work? Absolutely!

Or, how about the one that the majority of Americans favor the public option– while 87% claim they are happy with what they have?  Huh?  Will we have a public option in a bill by the end of the year? According to the Melissa Rycroft’s in the Democratic Party, absolutely!

Obama and his policies are decimating the economy, the private sector, our standing in the world community and our national security.  The appointment of his czars can be likened to an unadulterated shredding of Constitutional balance of power.  Yet, Obama remains absolutely committed to razing health care, denying troops in Afghanistan reinforcements and making short work of capitalism, free enterprise and democracy.  The Absolute Leader of the Free World is presently the proprietor of political and social pandemonium.  We might as well have the indecisive, befuddled Jason Mesnick in the Oval Office.

When The Bachelor asked Melissa to marry him she was absolutely enthralled and replied, “Absolutely!”  Two weeks later he dumped her.  How could Melissa have missed the fact that Jason was absolutely in love with Molly Malaney?

Even though we are on the precipice of absolute disaster — there are still those unlikely suspects who are absolutely convinced Obama is doing a great job. The truth is Obama’s popularity is dropping, faster than Jason Mesnick jettisoning Melissa from a sordid love triangle.

Miss Rycroft ecstatically accepted the final rose, slipped the ring on her finger and said, “Yes” to a marriage proposal.  The whole time she remained absolutely oblivious to the fact that Jason wasn’t the man she thought he was. Absolute chaos, humiliation and turmoil followed a devastated “Absolutely Girl” for weeks afterward…sort of like a nation that finds out too late that Barack Obama was absolutely the wrong person for the job.