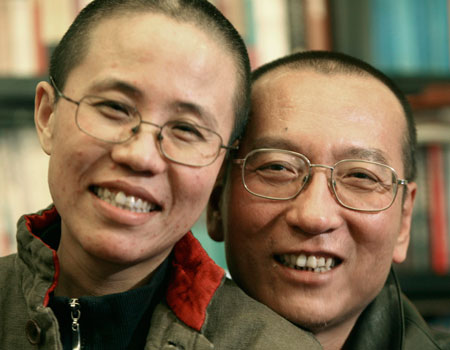 What a humble gesture on the part of Barack Obama to express congratulations to Chinese dissident/intellectual and 2010 Nobel Peace Prize winner, Liu Xiaobo.  Unfortunately, Mr. Xiaobo couldn’t make the event because he is sitting in a Chinese prison for daring to attempt to bring “human rights and democracy to China.”

Nobel committee chairman TorbjÃ¸rn Jagland said: “We regret that the laureate is not present. He is in isolation in a prison in northeastern China. Nor can his wife or closest relatives be with us….This fact alone shows that the award was necessary and appropriate.” Jagland continued, “Liu has only exercised his civil rights. He has not done anything wrong. He must be released.”

Based on multiple standing ovations and the empty chair and oversized portrait of the Chinese human rights activist, it looks like this year’s winner actually did something to deserve the prize.

However, last year’s winner deserves a follow-up award for proving once again, to anyone who had doubts that Obama counts himself among the “giants of history and courageous advocates who have sacrificed for freedom and justice” that if given the podium Barry always manages to turn the attention back on himself. With Liu Xiaobo sitting in a Chinese prison and standing as an example of sacrifice for democracy and human rights, it’s a little unusual that all Barack Obama can talk about is Barack Obama.

The statement released by the White House congratulating Liu began by a self-effacing Obama praising Mr. Liu Xiaobo for being “far more deserving of this award than I was.”  What “humble” Nobel Peace Prize winner Barack forgot to mention is that, unlike his esteemed self, Mr. Xiaobo received the prize for actually doing something.

The 2009 Nobel Peace Prize winner spoke of personal humility (rhetoric that likely is deserving of next year’s Academy Award), high aspirations, historical giants, advocates that exhibit courage, and the type of justice and freedom that requires sacrifice.

Obama then lobbied for the positive aspects of socialistic policies by lauding the Red Chinese.  Barack said: “We respect China’s extraordinary accomplishment in lifting millions out of poverty, and believe that human rights include the dignity that comes with freedom from want.”

Except in China, “freedom from want” includes everything except wanting freedom from prison if you happen to be there for promoting democracy and human rights.

Obama added, “Mr. Liu reminds us that human dignity also depends upon the advance of democracy, open society, and the rule of law. The values [Liu] espouses are universal, his struggle is peaceful, and he should be released as soon as possible.” If Xiaobo isn’t released, should America still respect China for addressing poverty by making sure that everyone gets an equal allotment of rice and advancing the rule of law that insists on a limited number of baby girls?

Before closing, the president brought the comments around to the crux of every conversation.  In order to leave the listeners focusing on what really matters, Obama said: “I regret that Mr. Liu and his wife were denied the opportunity to attend the ceremony that Michelle and I attended last year.”

Heaven knows flying to Oslo provided many opportunities for the Nobel Peace Prize winner’s wife Michelle to captivate the world at ceremonies, banquets and functions in haute couture that Liu Xiaobo’s wife Xia, if given the chance to attend, would probably have looked equally stunning in if she wasn’t under house arrest in China.